Atlantic City is home to many different types of entertainment. From seasonal beer-fests, poker tournaments, and hordes of wildly drunk bridesmaids party clogging the streets, AC is no stranger to unbound and goofy behavior. Now take all that and slap a costume on it.

Atlantic City Boardwalk Con is a brand new convention in New Jersey and it originally was supposed to start small. In the early planning phase of ACBC, the show was going to be held at the actual boardwalk of AC, but the number of vendors and guests steadily grew and management had to upgrade to the Atlantic City Convention Center to house everything. At the end of the planning, the inaugural show offered a big line up of comic publishers, celebrity guests, multiple panels and events to fill up over three days worth of things to do.

On May 14th, before the main show began, I headed to the Atlantic City Convention Center to pick up my badge. The convention center is close to all the major hotels in the area and incredibly convenient to get a few rounds of gambling in between show hours, panels, or food runs. I love when my love of conventions and the thrill of gambling fight for my attention, here are a few of my highlights of the adventure that was ACBC.

I was able to wander around the convention center after picking up my badge. I took in the silence that will later be replaced by the sounds of crowded fans. It also was a nice time to find fastest routes to panel rooms and where the bathrooms were located. At 7 pm, there was a opening after party that invited all the cosplayers in the area to come out and dance the night away. I’m not much of a dancer, but I couldn’t refuse a free party. On the stage, DJ Galactic Ray was spinning tracks and the event was hosted by Club Cosplay. I notice the convention cocktail special that was offered, and I am a sucker for those “exclusive” drinks that are named after something and I haven’t had Fireball Whiskey since Scare-A-Con.

It’s a creamy cinnamon explosion in a cup! 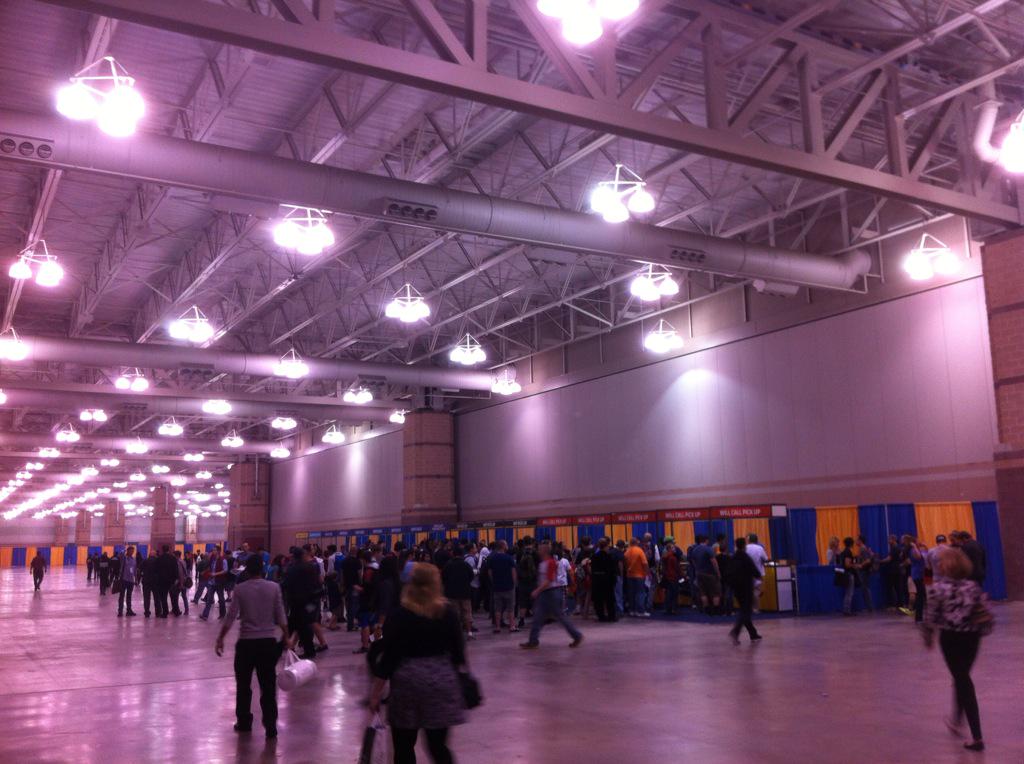 May 15th was the opening day, the show floor was open and people traveled from all over to attend. Some people were there to check out the sales at the show floor, some were there to get their cosplay on, and the rest were going to wing it. Over the course of three days I was aiming to attend a panel or event every hour, with some pockets of time to go wander around. Some panels overlapped so I had to make scarifies and compromises if I wanted to get the most out of my time there. Panels that ended early were great, so I had some extra time to hurry to relax and wait for the next panelist get on stage. Panels that ran overtime, those were going to be the monkey wrench that messes up my scheduling.

During the early hours of the convention, I was able to meet with Mike D’Alessio, the CEO & Founder of Atlantic City Boardwalk Con. Mr. D’Alessio was on the show floor, organizing and leading the opening ceremonies and getting excited for his dream convention coming true. Between directing his staff and announcing stuff on the PA system, I had a quick interview about what Atlantic City Boardwalk Con means to him. 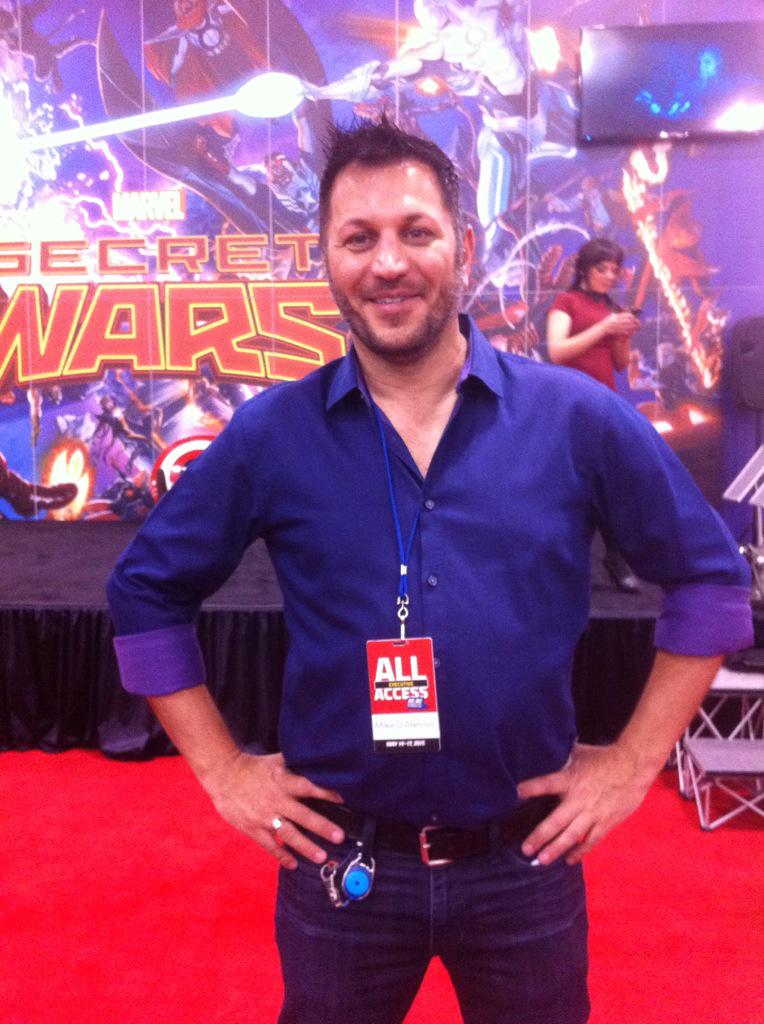 It was nice to actually mean the face with the convention, and meet another fanboy who evolved their passion to do something amazing with it.

One of the first booths I stopped by was Valiant, a comic company that I was unfamiliar of in the past, but Zach introduced me to a bunch of characters and story arcs that sounded interesting. I did know of two of their popular characters, Rai and BloodShot. Valiant has only been for around for 25 years, 2015 being the 25th anniversary of the company. I also stood in on a panel, Valiant 101. It highlighted key characters and story arcs that are happening to Valiant comics, and what the next projects are heading. 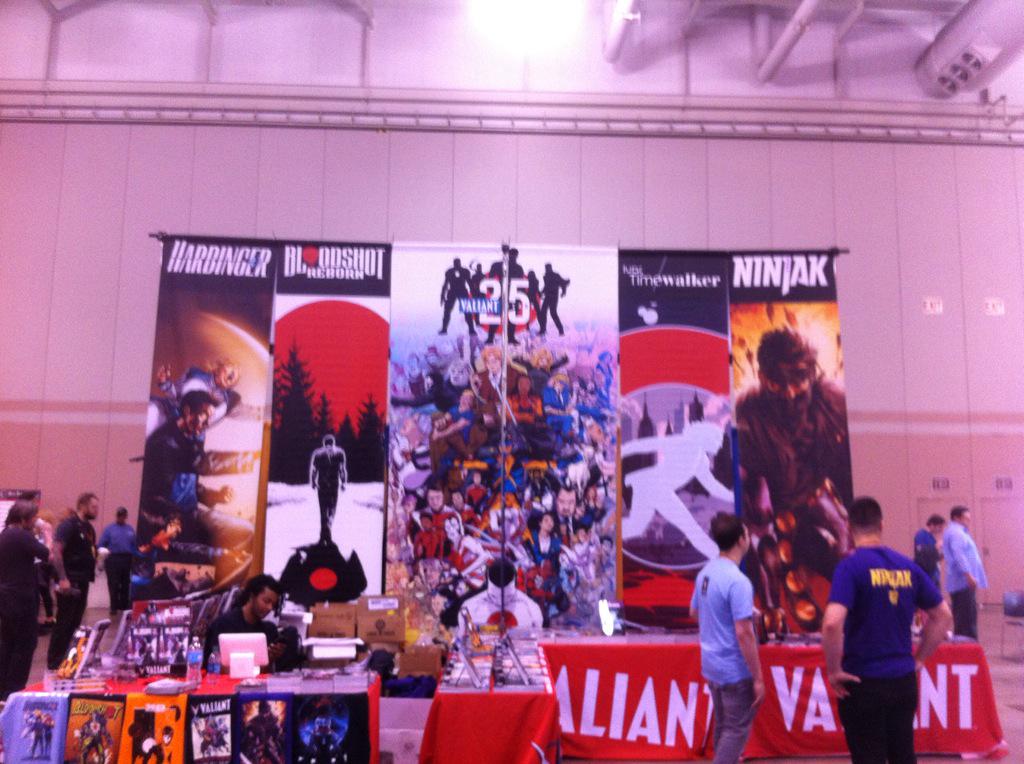 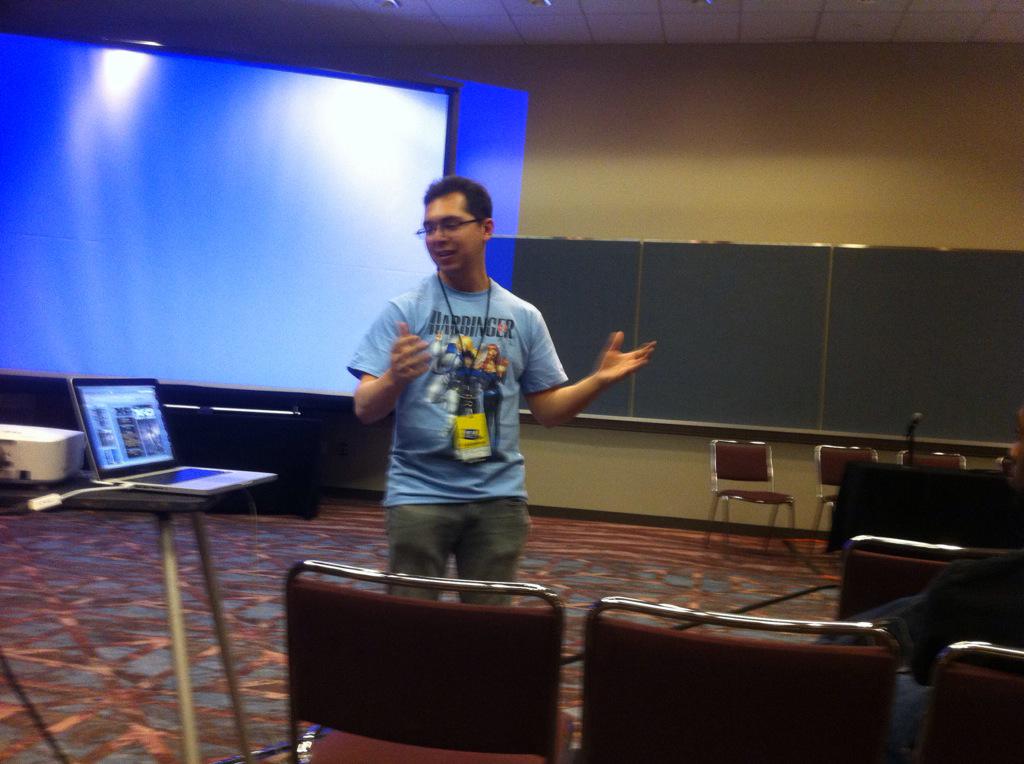 Another comic company that I stopped at was Aspen Comics. Known for their series Fathom, Aspen Comics is made up of a group of veteran comic writers and artists who love to create original stories and art. I attended their panel to learn about the company and the many comic series they are producing monthly.

I was walking around the artist alley area when I saw a banner with a woman in a leopard print bikini, holding a knife, in a jungle. So of course I locked eyes with the people at the booth to introduce myself. The guys of Wayward Raven are a small group of creators that specialize in short story comics and limited series runs. 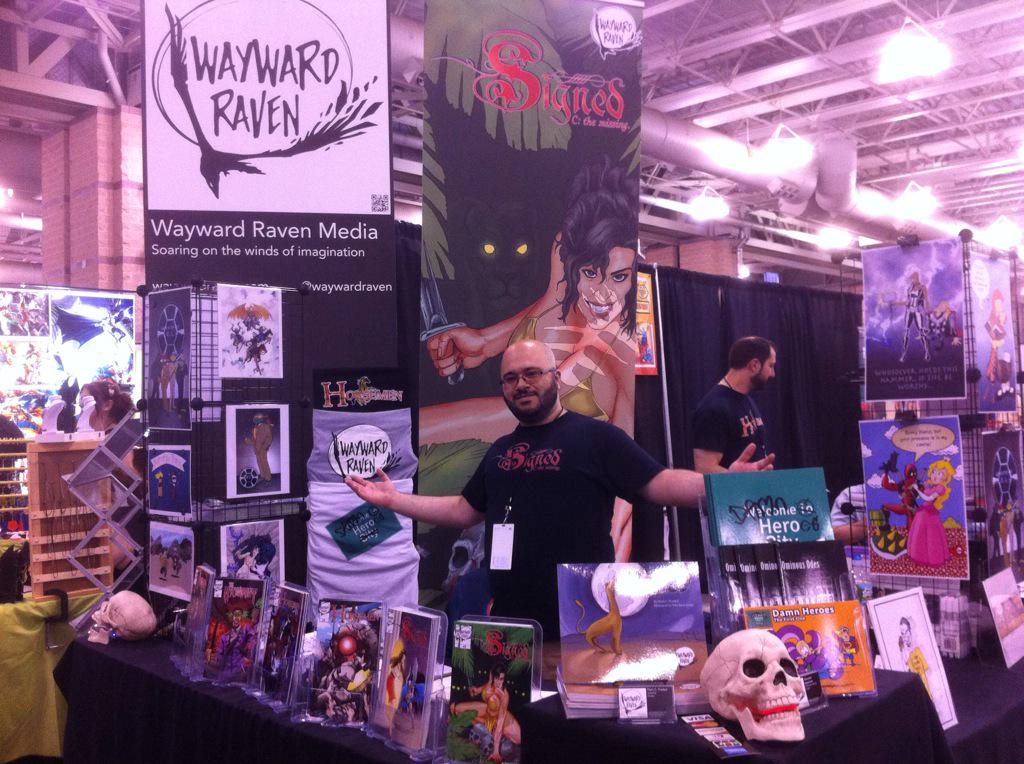 Not too far away, were the guys of Hijack Press. Like Wayward Raven, another small comic creators from New York. They have a few comics that specialize in the super natural and the occult. One of the interesting projects they have is a parody of Kamen Rider with their series Battle Bug

I chatted about the craziness that was Masked Rider and how most Saban products were bizarrely brilliant of how they editing and assembling random Japanese footage to create many shows.

One of the amazingly nostalgic booths was a collection of Batman vehicles brought over by Gotham City Super Cars. They brought in the live action Batman TV& movie vehicles and props, and had a few of Tim Burton Joker gang member at the booth. 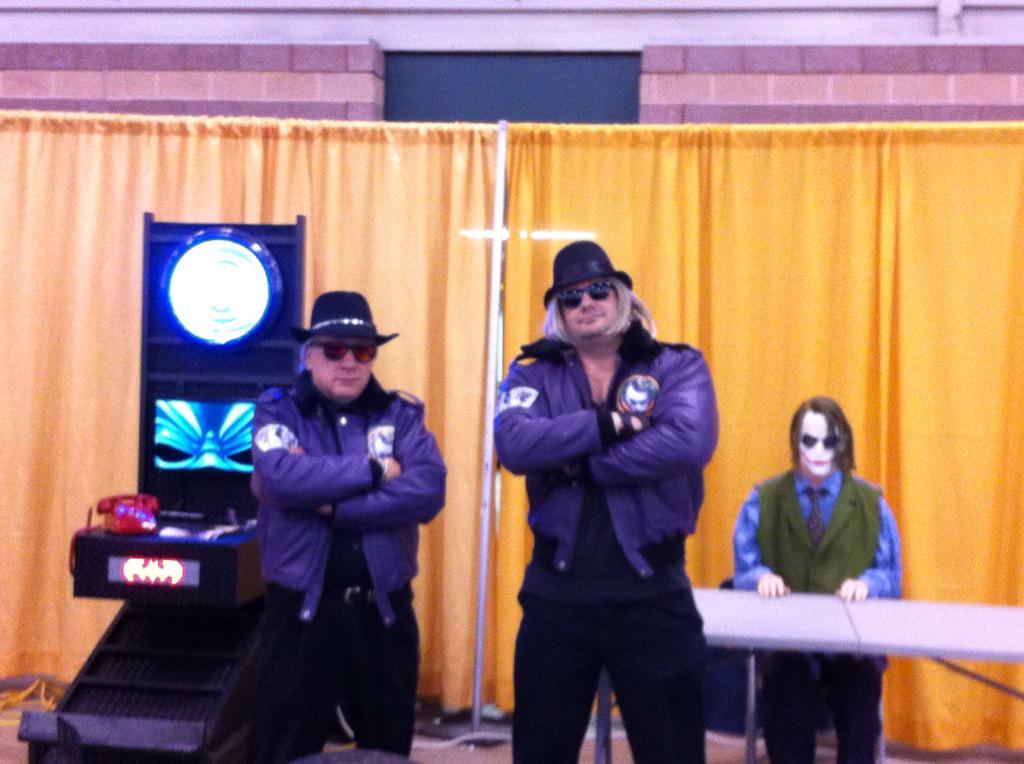 “Wanna go rough up a museum while listening to Prince?”

Walking further around the show, I met up with The Smoke, a cosplayer from Philadelphia that I have seen at shows and conventions in the past. He was dressed as the Blue Falcon from the series Dynomutt, Dog Wonder. It was a cool throwback to a Hanna-Barbera cartoon and Smoke totally owns the look.

The Smoke was also promoting Trek Isolation, a fan made series made by various actors and special guest.

I attended their panel to see about their production and how they were able to get around snagging Stan Lee for a guest spot on the show. The cast and crew were fans of the original Star Trek series and Star Trek: The Next Generation, and this project adds another story in the trek universe.

Another cosplayer was The Real Peter Griffin, who took the center stage to shout out a few family guy quotes, and do some commentary on other cosplayers. It was neat to hear the Peter Griffin voice make fun of the convention and it’s attendee. You would probably never hear Peter ever talk about the Red Skull and the Tesseract, but at ACBC you could!

Following up on the main stage was Run DMC‘s Darryl McDaniels, promoting his new comic series DMC. Joining him on stage was Comicbook Men star Ming Chen, helping him pump up the crowd and talking about Darryl’s newest comic project.

On Friday, Michael Rooker had a Q&A panel where he talked about his early career in acting and the behind the screen stories of Mallrats, Guardians of the Galaxy, and CliffHanger. The audience was allowed to ask random questions and his responses were genuine. I’ve seen many of Rooker roles and really enjoy his performances, it was pleasant to find out that his off camera personality is goofy, humble and still a bit tough. Someone ask him what his first fight was like, Rooker gave us a story about a neighborhood girl that actually beat up on Rooker. We all shared a laugh.

The Q&A session ended with Rooker handing out mini figures of himself to the audience as a gift if you got answered his personal trivia. It was pretty cool that it the last figure was given to a young cosplayer dressed as Yondu.

On Saturday, I stopped by Kevin Smith’s panels to listen to him talk about his experience as an actor and being a geek director During the Mallrats reunion panel Jason Mewes came on to give his perspectives and commentary of being part of the Askew Universe.

Between Kevin Smith’s panels, I sat in on William Shatner’s panel, and listen to the Captain talk about this past experiences and current project as Mark Twain. Shatner also had a funny story about his last time in Atlantic City, and how the he was unlucky at a poker tournament.

Ending the Saturday panels, I stopped by Jon Schnepp’s Panel to hear the newest details about “Death of Superman Lives What Happen?”, a documentary about the infamous failed Superman Movie that starred Nicolas Cage. We here on EverythingAction love all things Nic Cage, and Joe has written articles about the Super Cage incident in the past, so naturally we support Jon Schnepp’s project once it hit KickStarter.

During his panel, Rob Pierce and Schnepp offer out prizes if you could answer random Nicolas Cage trivia. I think I was prepare for this moment all my life, and I won a signed poster by getting an answer right. Remember kids, for every random Cage flick you watch, make time to watch Leaving Lost Vegas.

“I HAVE THE CAGE POWEERRR”

On Sunday, Chris Gore had a panel about his DVD-duesday experience, and his ranting on terrible, but awesome movies. Chris Gore was one of my influences in how I learned to embrace the weird and terrible movies, and it was mind blowing to meet him.

During this panel, Chris talked about this experience at G4, working with Olivia Munn, and reading us a passage of his book Celebrities Poop.

Okay Class, can we see Oprah poops just like you and me!

The Meeting of the Chris’s

Gore mention one movie that after he described it, changed what I understand of terrible movies. If you ever have to offend someone that loves movies, talk about Antfarm Dickhole and anything made from Bill Zebub.

I attended one big after party on Friday to hang out with the people of Level Up Entertainment and Aspen Comics, they teamed up to throw a party at Bally’s Casino, at the Mountain Bar.

There was tracks being spun by DJ Cutman, a favorite in the nerd party scene, a live karaoke band between the DJ breaks, and retro games to play with new friends/mario kart enemies. At the party, people could sit down with the Aspen Comics team to get a quick lesson on drawing, and also see how many drinks you can guzzle before you can’t draw a straight line anymore. Which leads to the final highlight here… 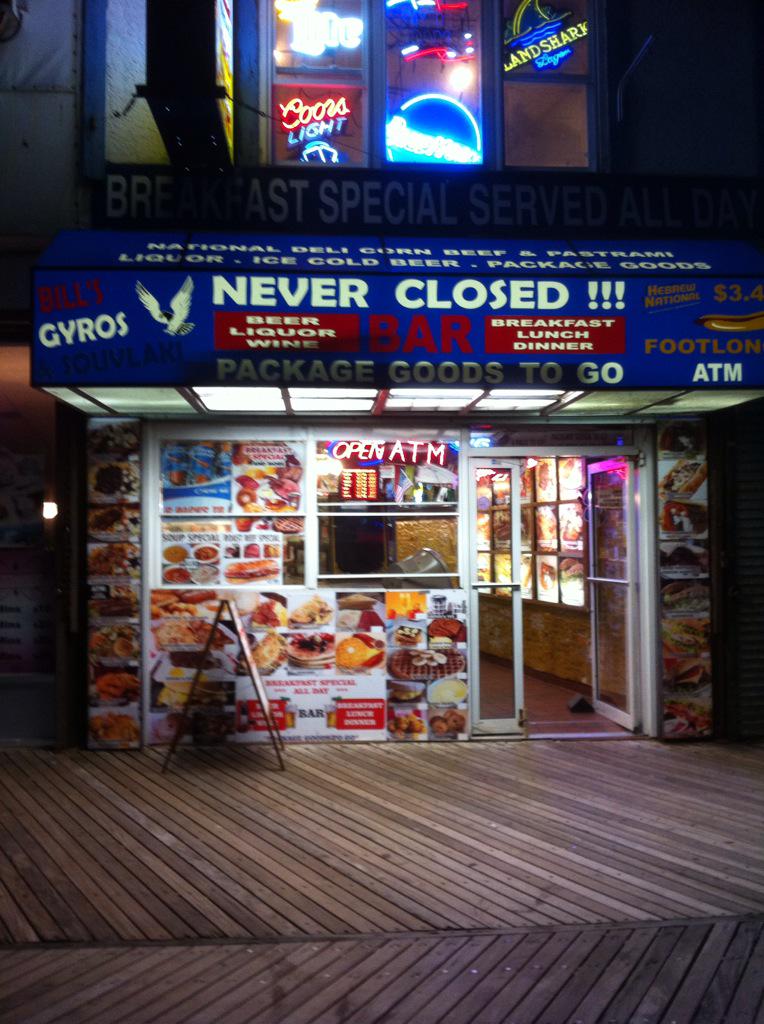 A staple to any good night of fun is late night eating. If you crave a cheese burger, a hot sandwich, or a gyro at 3 am, this place is for you. After the after party, a nice walk along to boardwalk to this spot to refuel was the perfect way to end my nights. ACBC is an experience that captures the geek culture into a convenient showcase, and the Atlantic City location gives it the special shore experience without the fist pumping parts. I enjoyed the inaugural show, and can’t wait for it’s return in 2016!