With the release of the original Ghostbusters on Blu Ray and the new game I thought I would take a look at some of the other Ghostbusters related stuff that the movie has spawned over the years.

The video for Ray Parker Jr.’s theme song is like pure concentrated 80’s being shoved into your eyeballs.  Parker Jr. is hanging out in a house where everything is covered in neon lights, he’s kind of harassing a young woman and random people jump out and yell “Ghostbusters” whenever he asks his pivotal question of “Who ya gonna call?”.  The highlight of the video is near the end as Parker Jr. actually joins the Ghostbusters for a stroll through Times Square.  If that wasn’t enough random 80’s celebrities start popping up to yell “Ghostbusters” culminating in Chevy Chase, which is something you don’t hear every day. 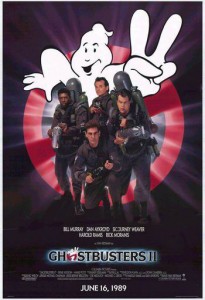 There’s a lot of hate out there for a number of 80’s sequels including Back to the Future 2 and this one.  Is it as good as the first? No, but then again what can be?  This one has it’s own charms including bad guy Vigo the Carpathian and his brainwashed henchman Dr. Janosz Poha, played by a scene stealing Peter MacNicol.  Also, they make the Statue of Liberty walk and control it with a NES Advantage.  It is kind of a bummer that they resort to slime guns instead of the trusty proton packs but the original cast is back and it’s still a fun movie. 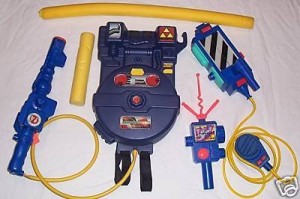 There’s probably not a kid out there who didn’t see Ghostbusters and instantly want a Proton Pack.  With the release of the series “The Real Ghostbusters” (which we’ll get to) there came a number of great toys, including replica Proton Packs, Ghost Traps and PKE meters.  There was also a great figure line that included all the Ghostbusters and a number of clever ghosts, including seemingly normal looking people who transformed into hellish demons.  One question though: Where is my Tobin’s Spirit Guide?

Not until Surge had a drink developed such a fervent fan base as Ecto Cooler.  An essential in lunch boxes across the world during the late 80’s, early 90’s, Slimer’s drink of choice was a delicious citrus flavored, green tinted drink that was most easily found in juice box form.  The drink was originally just supposed to be a tie in product for The Real Ghostbusters but exploded in sales and lasted with Slimer on the package till 1997.  The drink itself remained Ecto Cooler until 2001 when it was renamed Shoutin Orange Tangerine and in 2006 renamed again to Crazy Citrus Cooler.  In 2007 the drink was finally discontinued but many fans still hold out hope of it being brought back someday.

Started in 1986 and running until 1991, the Real Ghostbusters was a fantastic cartoon series that continued the adventures of Ray, Peter, Egon and Winston. To avoid legal trouble with Filmation’s Ghostbusters the “Real” was added to the title.  Slimer joined the gang as their sort of mascot/pet as they battled new ghosts every week, including tons from mythology like The Boogeyman, Tiamat, Marduk and even Cthulhu.  The show also featured a great voice cast including Arsenio Hall, Lorenzo Music, Dave Coulier and voice acting greats Maurice LaMarche and Frank Welker.  The show also had a number of smart writers, including future Babylon 5 and comic scribe J. Michael Straczynski, who wrote some of the smartest and darkest episodes in the series.