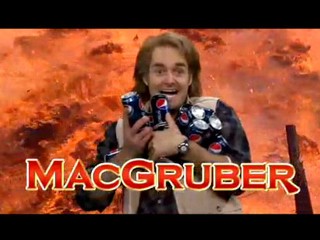 Making life saving inventions out of household materials, MacGruber! One of the only saving graces of recent SNL (besides the Lonely Island boys) has been Will Forte’s MacGyver parody, MacGruber.  Each sketch sees MacGruber and friends in some sort of control room with 30 seconds left before an explosion.  MacGruber then usually gets sidetracked or freaks out and the explosion goes off.  Apparently this is enough for a feature film, as announced by The Hollywood Reporter today.  Jorma Taccone, who wrote most of the sketches, is going to direct and Lorne Michaels will, of course, produce.  Will Forte will play the title character and fellow SNLer Kristin Wiig will co-star.  Also in talks to come on board are Ryan Phillippe and Val Kilmer.  The plot would revolve around the Army recruiting a retired MacGruber to come back and battle one of his archenemies.  Phillippe would play an Army colonel who is teamed up with MacGruber and Kilmer would play the villain, Cunth, who killed MacGruber’s wife.  The sketches are great but I’m a little worried because A) they work perfectly in the 30 second time frame and B) Wayne’s World is the only good movie to be based on an SNL sketch.  In case you haven’t seen the sketches (and consequently been confused this whole article) then take a look below:

Up to Speed: MacGruber Season 1

Action Hero of the Week: MacGruber