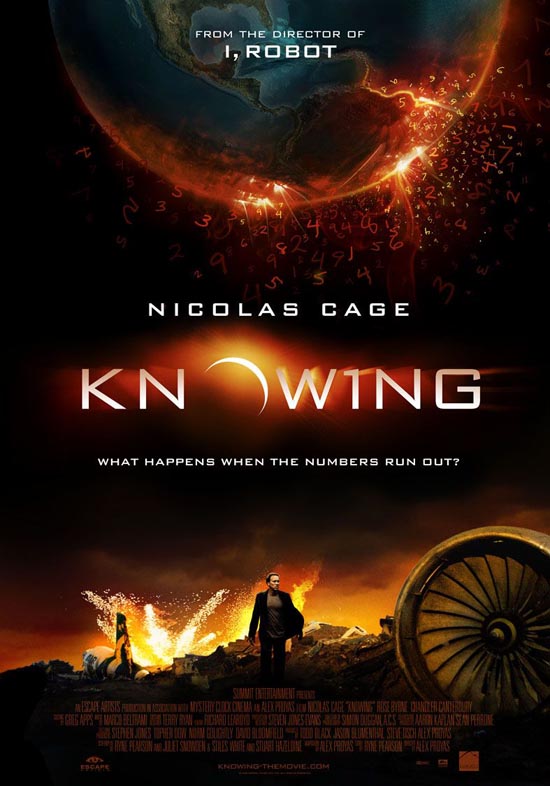 Nicolas Cage has not been all that great at the box office recently.  And by that I mean “committing acts of cinematic crimes against humanity”  The one two punch of The Wicker Man and Next was something people are still trying to recover from.  Needless to say, expectations weren’t high going into Knowing.

Directed by Alex Proyas, who brought us I, Robot, the plot of Knowing follows MIT astrophysicist John Koestler (Cage) and his son Caleb.  50 years ago a time capsule was buried at William Dawes Elementary school and one of the students, Lucinda, instead of drawing what the future would look like, filled the paper with numbers.  Of course, Caleb recieves the numbers and John figures out that the numbers correspond to every major disaster of the last 50 years and there are three to come.  It starts out fairly interesting but the movie kind of loses it’s mind in the last half hour or so and you might wonder if someone spliced in The Fountain or something similar.

The highlight of the movie is the disaster sequences.  There is a horrific plane crash, a subway crash and the final disaster that I won’t spoil.  The plane crash particularly, is well done as Proyas uses a two minute tracking shot of John walking into the debris try to find survivors.  People are screaming and running around on fire, it’s frighteningly realistic.  Unfortunately there isn’t the level of fun that comes from say, a Roland Emmerich disaster movie.  Everyone is grim faced and the movie takes itself a little too serious for what it is.  This probably isn’t helped by the acting, which is pretty universally bad.  When Nicolas Cage isn’t mumbling sadly about numbers he’s running around disasters like a madman.  The actor who plays his son is not very good and comes off as kind of an ass throughout the movie.  Rose Byrne plays the daughter of Lucinda but she is very much in the Zooey Deschanel in The Happening school of acting where she just acts scared and wide eyed the whole time.

Overall I would say that Knowing is an OK movie, which is definitely a step up for Cage.  The acting is not very good and the plot derails itself, much like the subway scene, near the end but the disaster sequences are very well done and probably worth a rent just for that.