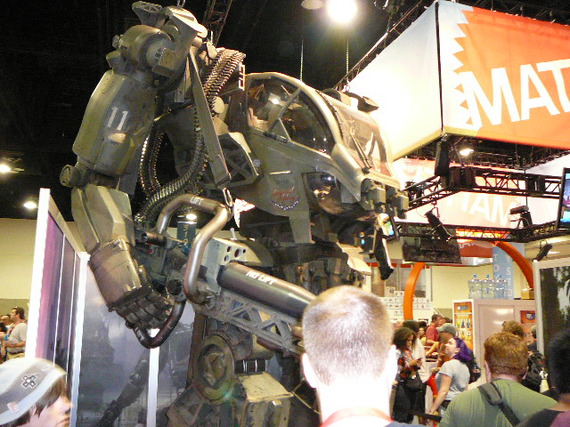 Apparently James Cameron is not only the king of the world, but also the king of comic con, as his panel has been one of the biggest events of the show.

In case you didn’t know, Avatar is the upcoming Sci-Fi epic from Cameron, who gave us Terminator 2, Aliens and Titanic.  He took a long break from making feature films to direct documentaries about deep sea life like Ghosts of the Abyss and Aliens of the Deep.  In Avatar, humans have discovered a planet called Pandora inhabited by 10 foot tall aliens called the Na’vi.  The atmosphere of Pandora is poisonous to humans so they create human/Na’vi hybrids called avatars which can be controlled with a mental link.  One of the avatar controllers, Jake (Sam Worthington), falls in love with a Na’vi princess and becomes involved in the battle between the military and the Na’vi.

Cameron showed off 25 minutes of footage at his Comic Con panel which included action scenes of Jake’s avatar getting chased by local Pandoran wildlife, how the Avatar process works and more.  He also revealed that on August 21 you can see 15 minutes of Avatar in 3D for free in a number of theaters across the country.  Cameron has been using some cutting edge 3D technology, including cameras that replicate what human eyes see in 3D.  The movie is set to come out this December.

One thought on “James Cameron’s Avatar”