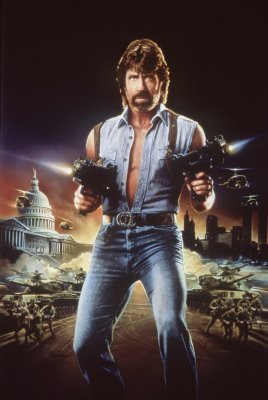 When Communists try to invade America, there’s only one man who can stop them: Matt Hunter.  Hunter is a former CIA operative who retired to the Florida Everglades with his pet armadillo.  On one of his CIA missions he foiled a plot to kill the president by Russian terrorist Mikhail Rostov.  Hunter was ordered not to kill Rostov so instead he kicked him in the face and arrested him.  Rostov escaped and leads a group of terrorists in an invasion of America.

Arriving by boat on a Florida beach, thousands of terrorists get into U-Haul trucks and spread out across Florida.  Before they can do any real damage though (they blow up a suburban cul de sac), Rostov demands that they kill Hunter.  So, Rostov leads a group of air boats and blows up Hunter’s house, which Hunter manages to escape from.  Rostov now has a big problem since Matt Hunter is back in action.

Hunter goes on a one man terrorist stopping spree.  He prevents an attack at a shopping mall by driving his truck through the front of the mall, he stops a group of terrorists from blowing up a church by killing them with their own bomb and he saves a school bus full of kids from a pack of C4 attached to the side by taking it and throwing into the terrorist car.  Unfortunately Hunter can’t be everywhere and he arrives too late to stop the destruction of a local carnival.  Hunter then decides this needs to end once and for all and comes up with a plan to corner the terrorists.  All the state governors are coming to Atlanta for an emergency meeting.  Hunter will be arrested by the FBI and taken to the command center in Atlanta.  Rostov learns of this and heads to Atlanta to finish off Hunter once and for all.  Unfortunately for him, his men are corned by the National Guard and a ton of tanks and are taken out or surrender.

Meanwhile, Rostov and a few of his men are scouring the command center looking for Hunter but Hunter lives up to his name and takes them down one at a time until only he and Rostov are left.  Both men are armed with rocket launchers but Hunter is quicker off the draw and “It’s Time to Die” for Rostov as he is hit by a rocket and launched out of  window.  America wasn’t ready for an invasion, but thankfully Matt Hunter was.