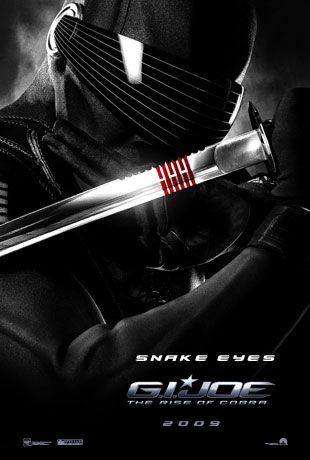 Hot off the heels of Transformers domination at the box office comes Hasbro’s other toy superstars, GI Joe.  It has some moments but you have to dig through a retarded plot, bad acting and inexplicable changes from the source. (Probably some spoilers ahead)

The plot concerns arms dealer McCullen aka Destro (Chris Eccleston) wanting to take over the world using warheads armed with nanobot payloads that will destroy anything metal in their path.  He has help from the sexy Baroness (Sienna Miller), the ninja Storm Shadow (Byung-hun Lee), master of disguise Zartan (Arnold Vosoloo) and the diabolical Doctor (Joseph Gordon Levitt).  Opposing him are of course GI Joe led by General Hawk (Dennis Quaid) along with his Alpha team of Heavy Duty (Adewale Akinnuoye-Agbaje), Snake Eyes (Ray Park), Scarlett (Rachel Nichols), Breaker (Saïd Taghmaoui) and new recruits Duke (Channing Tatum) and Ripcord (Marlon Wayans).  The villains are easily far more interesting than the Joes, who are all pretty boring except, of course, for Snake Eyes, with Destro in Bond villain mode complete with Arctic underwater base and Levitt’s Doctor in full mustache twirling mad scientist mode. There are tons of holes and questionable logic throughout the plot like why would Destro even sell and then steal back the warheads when he can just launch them himself and get the same result?  Why does Destro need the Baroness’ husband to “weaponize” the missile, I mean, shouldn’t he have the technology himself?  There’s also the terrible decision to link Duke, Baroness and The Doctor together. It’s completely unnecessary and it just leads to cliche showdown at the end.

There are some good action scenes like when the GI Joe base is attacked by tunneling machines straight out of the Ninja Turtles cartoon and the Paris attack is pretty good despite the completely stupid “accelerator suits” that got played up in the trailer.  Snake Eyes is more effective than Duke and Ripcord without an accelerator suit.  Also, Snake Eyes is probably the only competent Joe in the group.  Ray Park is a crazy martial arts genius and his battles with Storm Shadow are definitely the highlight of the movie.  The Joes barely stop Paris from being destroyed but they cause millions of dollars in property damage and get arrested by the French police and this is on top of their base getting almost completely destroyed by 6 people.  The accelerator suits could have easily been replaced by some sort of crazy vehicle and it would have been way more in line with the spirit of GI Joe.

Speaking of that, there’s lots of little things that are changed for seemingly no reason from the original cartoon and comics.  Things like the aforementioned connections between Duke and Baroness, Scarlett and Ripcord being the romantic subplot instead of say Scarlett and Duke or Scarlett and Snake Eyes and probably my biggest “WTF” of the movie being that THERE IS NO MENTION OF COBRA TILL THE END!  Throughout the whole movie the organization is Destro’s MARS corporation and then in the end the Doctor escapes from Destro’s underwater base in a Cobra branded submarine, puts on a horrible mask and declares himself Commander.  The Rise of Cobra shouldn’t happen in the last 5 minutes of the movie.  Cobra Commander’s has an iconic look that would have been awesome in live action but maybe for the sequel, which the movie blatantly sets up.

So overall I would say definitely wait for DVD on this one and if you desperately need GI Joe action check out the far superior GI Joe Resolute that was released online earlier this year.  I’m pretty sure all the episodes are on youtube.