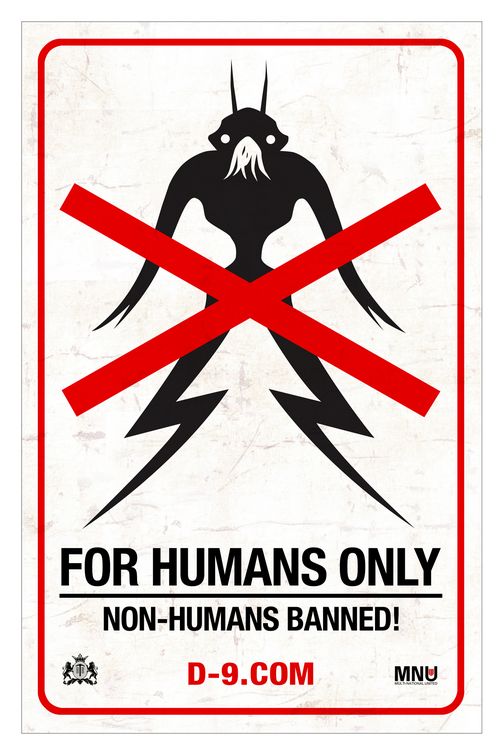 This summer was bookended by two fantastic sci-fi/action movies, we started with Star Trek and we ended with District 9.  The directorial debut of Neill Blomkamp and backed by Peter Jackson, it tells the story of a marooned species of aliens living in a slum-like section of Johannesburg, South Africa and office drone Wickus Va De Merwe, who is appointed the head of an effort to move them to a more secure area.  Both Brian and I saw it and you can check out our thoughts below. (Spoiler Warning)

Zach: District 9 was a fantastic way to (almost) end the summer.  It has fantastic action and suspense and a brain on it’s shoulders to boot.  Blomkamp makes the universe of the film completely believable with the introductory documentary style and all the little touches like signage and grafitti expressing people’s opinions of the aliens.  The movie then pretty seamlessly transfers into a more traditional narrative as our “hero” Wickus leads an eviction operation into District 9 and gets contaminated by an alien power cell.  The transformation he goes through is horrific and very reminiscent of David Cronenberg classics like The Fly.  Sharlto Copley needs to get some sort of recognition come award time because he is amazing in his ability to run the entire gamut of emotions and makes you at numerous times either hate him, like him, feel disgusted by him or pity him.  The amazing thing is that you also care about his alien “co-star” Chris Johnson, who has figured out a way to jump start the ship and get his people home. The CG of the alien “Prawns” is amazing and has set the bar pretty high for movies like “Avatar” which are promising photo realistic CG.

Blomkamp can handle the drama but he can also handle action, as seen in the last 45 minutes/hour of the film.  Wickus and Chris use some awesome weapons including a gun that fires what looks like electricity that instantly explodes whatever it comes in contact with and Wickus eventually pilots a super powerful mech in an all out battle through District 9.

There is really not a lot to say that’s negetive about the movie.  I guess the main thing would be that everyone besides Wickus is pretty much a stereotypical character, there’s the evil bureaucrats, sadistic military men and the worried wife.  None of the humans are in the same league as Copley in terms of performance.

District 9 is an original, fun, thrilling and also thought provoking movie from someone who is surely going to be a director to watch for in the future.  If you haven’t seen it yet, I highly recommend you go and check it out.

Brian: I may not be a filmmaker, but I know that making a good action movie with some cultural relevance is hard. Sure, “Rambo” contained a deep current events issue with the atrocities in Myanmar, but you didn’t really learn anything from it. “District 9” is a movie that takes place in South Africa and contains a story about a group separated from culture and treated horribly… but doesn’t straight-up allude to apartheid.

The thing I found most remarkable about this movie about aliens and a scrappy underdog action “hero” was that it seemed so real. Blomkamp has a knack for using the “mockumentary” style to give us a good look at just what is going on at the beginning of the movie. While this techinque has been over-played recently in films, Blomkamp uses it to familiarize the audience with the predicament.

Even though District 9 has the intention of being a movie with a message, it also balances the drama with the action to keep the casual moviegoer interested. When we are introduced to Wilkus he’s the perfect shrimpy little nerd… but by the end of the movie, he has something to fight for. He becomes the little guy to root for.

Not to mention, the special effects are just awesome. The aliens are definitely realistic, but I found the weapons and explosions to be particularly impressive. District 9 may not win Best Picture, but it does more to keep itself from being more than a moronic movie with shit blowing up. (You hear me, Mr. Bay?) It’s a surprise hit with reason. Let’s hope Hollywood learns from this success instead of beating us over the head with superheroes and transforming robots.