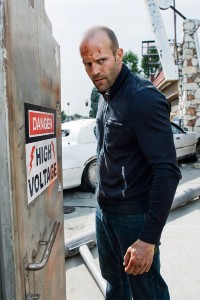 Chev Chelios is justifiably one of the angriest men on the face of the earth.  Coming to Los Angeles from London, Chev got a job for the West Coast Crime Syndicate as a hitman.  Crime boss Carlito grows worried about the fast growing Chinese Triad influence in the city and orders Chev to kill their boss, Don Kim.  Chev has been trying to get out of the business to spend more time with his girlfriend Eve and lets Don Kim live on the condition that he disappear.  The Triads are not pleased and threaten Carlito, who then explains he had nothing to do with it and he’ll take out the rogue elements of his organization that were responsible.

Chev’s rival, Ricky Verona, tells Carlito he can deal with Chev and breaks into Chev’s apartment and injects him with the “Beijing Cocktail”, a poison that will kill him by shutting down his adrenal gland and stopping his heart.  Chev wakes up the next morning and learns all this from a DVD left by Ricky.

Chev jumps into his car to kill Ricky and calls his doctor, Doc Miles, who tell Chev he needs to keep his adrenaline up in order to slow down the poison.  Chev starts an insane rampage across LA including buying cocaine from his drug dealer Orlando and then getting into a fight with his entire gang, killing Ricky’s brother Alex with a meat cleaver and Desert Eagle, shooting up epinephrine at the hospital and stealing a police motorcycle directly afterward and having sex with his girlfriend Eve in the middle of Chinatown.  He gets help from his flamboyant informant Kaylo, who Verona eventually kills.

Chev eventually shoots and chops his way through Ricky’s goons and arranges a meeting with Carlito and Ricky on the roof of Carlito’s hideout. Chev got help from Don Kim and a shootout ensues where Carlito and most of his men are killed.  Ricky tries to escape in a helicopter and Chev follows him.  The two have a fistfight in the chopper until both of them are thrown out the side.  Chev calls Eve one last time and then lands on a car.  However, he somehow survives the fall and is scooped up by Chinese medics.

It turns out that Triad leader Poon Dong, found out about Chev’s insanely strong heart and put out a call for it.  The medics remove Chev’s heart and replace it with an inferior artificial one.  The doctors were then going to harvest the rest of Chev’s organs but he wakes up and kills them before they can.  Chev finds himself attached to a belt worn battery that is keeping the artificial heart going.  Chev gives another call to Doc Miles, who tells him he can transplant Chev’s heart back in if he can find it.  Chev unfortunately crashes his car and breaks the battery so he must continually electrocute his body to keep going, which he does using a car battery, a transformer and rubbing against people.  He chases one of the Chinese goons, Johnny Vang, all around Los Angeles, getting into a shootout at the strip club where Eve now works and killing Don Kim and his men inside of their limo.

Chev eventually catches up to Johnny at an electric plant and beats him in fistfight but finds his heart isn’t in the cooler he was carrying.  The heart has already been transplanted into Poon Dong but Doc Miles manages to kidnap him with the help of his assistant Chocolate.

Chev’s victory is short lived when he is knocked out by gang member under the command of El Huron.  They take Chev to El Huron’s island and it is revealed he is the third Verona brother and that he is keeping Ricky’s head alive in a fish tank.  Chev is tortured by El Huron until Kaylo’s brother Venus arrives with a gang of his own and a massive firefight ensues.  Chev climbs on top of a utility pole and shocks himself using the transformer.  He catches himself on fire but is kicked into overdrive and beats El Huron to death.  Chev suffers massive burns on his face and body and is rushed into surgery by Doc Miles.  He manages to get Chev’s heart back in but believe that he didn’t make it but after he and Eve leave Chev’s eyes open and his heart is beating.  Chev’s status is currently unknown but nothing worse could possibly happen to him, right?