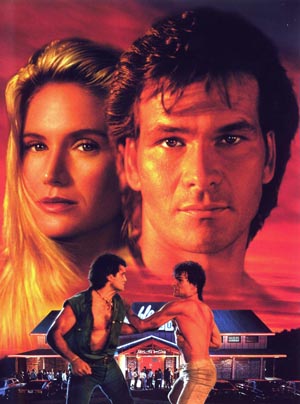 Dalton is perhaps the greatest bouncer in the history of the bouncing industry.  Having earned a degree in Philosophy from NYU, Dalton immediately decided to apply this degree to throwing people out of bar and breaking up fights.  He is working a club in New York City when he is approached by bar owner Frank Tilghman, who wants Dalton to help him clean up his bar, The Double Deuce, in Jasper, Missouri.  Dalton agrees and when he arrives finds the Double Deuce in horrible shape with drug dealing, fights and corrupt employees.  Fortunately for Dalton he’s friends with the house band, the Jeff Healey Band.  Dalton then buys a crappy car and rents a ski lodge like loft from local farmer Emmett.

Dalton sets about to cleaning up the Double Deuce, firing bad employees and generally breaking skulls.  He becomes friends with a number of the townsfolk, including auto store owner Red and his niece Dr. Elizabeth Clay.  Dalton also runs afoul of local businessman/crime boss Brad Wesley, first when Dalton fires Wesley’s nephew Pat from the bar and again when Dalton refuses to help Wesley drive out the local merchants so Wesley can build a shopping center, or something.

Wesley starts an all out assault on Dalton and his allies; fire bombing Red’s store and trying to hijack the Double Deuce’s liquor delivery.  Unfortunately for Wesley’s goons, Dalton had called his friend Wade Garrett, another world famous bouncer, who arrives just in time to help Dalton defend the booze.  Wesley ups the ante by driving a monster truck through the local car dealership.  Wade tries to convinced Dalton to leave town but Dalton is determined to stay and stop Wesley.  Doc Clay comes by to convince Dalton to leave as well, but not long into their conversation there’s an explosion from Emmett’s house.  Dalton runs to investigate and finds Wesley’s right hand goon, Jimmy, fleeing the scene on a dirtbike.  Dalton gives chase and a deadly battle begins on the edge of the nearby lake.  Dalton eventually gets the upper hand but Jimmy pulls a gun.  With no other choice, Dalton has to make a desperate move and rips out Jimmy’s throat.  He then pushes the body into the water and yells at Wesley (who lives across the lake from Emmett).

Dalton arrives at the Double Deuce and gets a telephone from Wesley, threatening that he will kill either Wade or Elizabeth.  He tells Dalton that he flipped a coin and Dalton will find out the result soon enough.  Wade then stumbles into the bar badly beaten.  Dalton decides this is the last straw and agrees to leave with Wade but first must go get Elizabeth.  Elizabeth refuses to go anywhere with Dalton after seeing him rip Jimmy’s throat out so Dalton heads back to the Double Deuce and finds Wade dead on the bar with a knife and a note that says, “It was Tails”.

Dalton then launches a vicious assault on Wesley’s mansion, setting his car to barrel toward the house and then systematically taking out his goons one at a time.  Eventually it comes down to Dalton vs. Wesley in Wesley’s trophy room.  Wesley proves no match for Dalton and is bloodied and broken in a chair.  Dalton goes for the throat rip again but Elizabeth arrives and Dalton decides Wesley isn’t worth it.  Wesley takes this oppurtunity to pull a gun and threatens to shoot Elizabeth but is interrupted by the local merchants, led by Red, Emmett and Frank.  They kill Wesley in a hail of shotgun fire and play dumb when the police arrive.

Dalton decides to stay in Jasper and continue doing what he does best, keeping the bar safe from belligerent drunks and philosophizing.