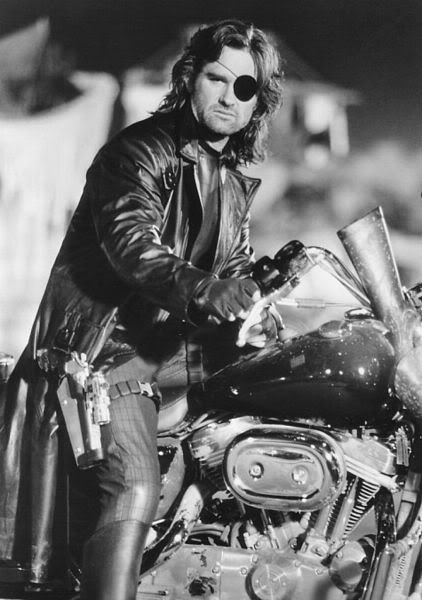 In the far off future of 1997, New York City has been converted to prison due to a 400% increase in crime.

En route to an important meeting between the US, USSR and China, Air Force One is hijacked and crashed into NYC, the President ejects in an escape pod but is quickly captured by inmates.  A rescue attempt is immediately launched but the troops are presented with one of the President’s fingers and ordered to immediately leave the prison or the President will be killed.

Police Commissioner Hauk decides there’s only one man who can get the job done and that’s former special forces commando Snake Plissken.  Snake was recently arrested for attempting to rob the Federal Reserve but is offered a pardon if he is able to retrieve the President and the tape he was carrying in 24 hours.  Snake is equipped with weapons and injected with microexplosives that will kill him if he doesn’t escape in the 24 hours and makes his way to Manhattan in a glider.

Almost immediately upon arriving, Snake is attacked by a gang of sewer dwelling cannibals and barely escapes by fleeing into a nearby apartment building.  Snake then finds the abandoned pod and follows the President’s wrist mounted beacon to a theater where the beacon is now in the possession of a crazy old man.  Snake then meets a friendly cab driver named Cabbie who tells Snake that he can help him find the President.

Cabbie takes Snake to meet with Brain, an intelligent inmate who Cabbie says knows everything that is going on in the prison.  Snake recognizes him as Harold Hellman, one of his partners in the Reserve job that left Snake to take the rap.  Brain tells Snake that the Duke of New York, the most powerful criminal in the prison, has the President.  Brain and his girlfriend Maggie agree to lead Snake to the Duke’s compound.

Snake attempts to sneak into the base but is captured by the Duke’s goons.  The Duke forces Snake to fight one of his henchmen, a giant ogre like criminal, who Snake defeats by slamming him in the head with a nail covered baseball bat.  While Snake is fighting the goon, Brain and Maggie manage to rescue the President and head for Snake’s glider.  The Duke finds out about this and orders everyone to try and recapture the President. Snake escapes in the confusion and meets back up with Brain, Maggie, Cabbie and the President.  The glider is pushed off the top of the World Trade Center by the Duke’s goons so the group decides to flee across the only bridge back to civilization.  The Duke pursues them and in the ensuing chase, the cab hits a mine and kills Cabbie.  The group flees on foot but Brain is killed by a mine and Maggie is killed when she decides to stay with his body and try to hold off the Duke.

Snake would eventually have to do the same thing on the west coast but the least said about that, the better.

If you have an Action Hero that you think should be featured in Real Men of Action feel free to shoot us an e-mail or leave a comment.