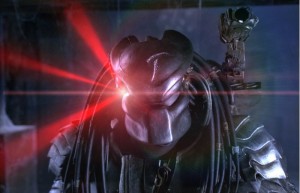 Robert Rodriguez’s sequel/reboot of the Predator franchise is moving along and the website Latino Review got a look at the script and say it’s “a 90 page kick ass sci fi movie worthy of the original.”

The plot follows a group of humans who are abducted by the Predator species for their combat skills and their ability to be worthy prey.  The group is lead by a man named Royce who apparently impresses the Predators with a kill he makes.  The rest of the group is from all across the globe including a Mexican drug cartel enforcer (most likely played by Danny Trejo, who was recently cast in the movie), a Yakuza member, a French female sniper, A giant Russian who uses a mini gun similar to Jesse Ventura’s in the original, a felon and a small, quiet man who is on the FBI’s most wanted list.

The group is dropped onto the Predator homeworld into a “game preserve” and are then hunted by a group of Predators who have Predator dogs and Predator falcons and led by a Super Predator, a jacked up version of the Predators we’ve seen before.  The group also meets former “prey” and learns the Predators have been abducting humans for years.

Robert Rodriguez usually delivers when it comes to crazy, over the top action so hopefully this will rock when it comes out next summer.