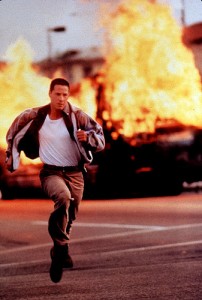 Jack Traven doesn’t have the best luck when it comes to transportation.  He first has to deal with an elevator of hostages that is rigged to explode by disgruntled former cop, Howard Payne.

Being the mavericks that they are, Harry and Jack use a nearby crane to hold the elevator from the roof and manage to get the hostages out just before Payne blows the cables.  Jack realizes that Payne must have heard them and is actually somewhere in the building so he and Harry attempt to find him.

Payne manages to find Harry first and holds him hostage with some more explosives.  Harry suggests that Jack has to shoot the hostage to take him out of the equation, which Jack does and chases Payne into a parking garage where an explosion is triggered and Jack is knocked unconscious.  Payne is assumed dead.  Harry and Jack are given commendations for their actions and think that the worst is over.

The morning after, Jack is on his way to work when a bus explodes nearby while he is getting coffee.  Jack recieves a call on a pay phone from Payne, telling him how pissed off at Jack he is and that he’s rigged another bus to blow if it goes over 50 mph.

Jack takes off to try and catch the bus, commandeering a motorist’s Jaguar and jumping onto the bus on the middle of the freeway.  He informs the passengers that he’s a cop and one of the passengers, obviously with criminal charges, pulls a gun.  Jack defuses the situation but not without the bus driver getting shot.  Another passenger, Annie Porter, takes over driving the bus and Jack gets in touch with Harry and their captain Mac McMahon.

The bus is already above 50 mph so it cannot slow down and barrels around Los Angeles.  Jack negotiates with Payne to let the bus driver off and they transfer him to a police flatbed but another passenger tries to escape and Payne blows up the stairs beneath her, killing her.  Meanwhile, Harry discovers who the bomber is and where he lives but is killed when the house they raid is rigged to explode.  Eventually the bus comes to an unfinished section of Interstate 105.  The bus has to jump a huge gap, which it barely does and then heads to the airport so they can circle without dealing without traffic.

Jack is allowed off by Payne under the pretense that he is going to setup the money for the ransom.  Jack then suits up and heads under the bus on a sled attached to a tow truck.  The bomb is more complicated than they realized and the sled starts to go out of control and Jack has to jam a screwdriver into the fuel tank to stay on.  He gets back into the bus and figures out that Payne must have a hidden camera based on what he’s been saying about Annie all day.

With the help of a nearby news van, the police manage to record and loop the footage from the bus and get all the passengers except Jack and Annie off the bus.  Jack and Annie tie off the steering wheel and lock the gas and then escape on the door hatch of the bus.  The bus crashes into a fuel plane and explodes.

The police then attempt to arrest Payne by monitoring the drop for the ransom money.  Unknown to them however is the fact that Payne had a hole underneath the designated trash can and took the suitcase without the police knowing.  He is also disguised as a cop and lures Annie away from police protection.  Jack goes to see what is going on with the money and discovers the hole.  He investigates and finds Annie with a vest of explosives and Payne with a dead man’s switch.  Payne and Annie get onto an oncoming subway train and Jack follows by jumping onto the train and climbing onto the roof.  Payne hears him and goes out to confront him.  The two have a vicious fight which ends with Payne being decapitated by a tunnel light.

Jack heads back into the subway train and defuses the vest Annie is wearing but is unable to unlock her handcuffs and the train is out of control.  Jack decides if they can’t slow down, they’ll speed up and attempt to derail the train instead of hitting the barrier at the end of the tracks.  The train does derail and crashes through a section that is under construction before smashing into the street above.  Jack and Annie then start a relationship that apparently ends because Jack is too much of an adrenaline junkie.  That or he saw what was going to happen on that cruise ship.