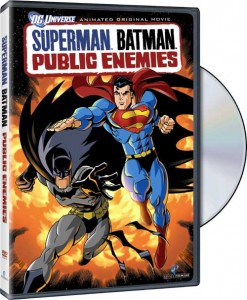 Although I’m more of a Marvel fan than DC, I can’t deny that DC is putting out some awesome and fun animated movies.  I talked about the Green Lantern movie a few weeks ago and last week saw the release of Superman/Batman: Public Enemies.  The movie is based on a series of comics from a few years ago and the movie follows the same plot which is Lex Luthor has essentially bought his way into the presidency and demands that all superheroes must work for him.  There is also a kryptonite asteroid that is on collision course with Earth and will cause untold devastation if not stopped.  Lex has a meeting with Superman which is really just to set him up for murder and now Superman, with Batman’s help, must stop Lex and the asteroid.

Pretty much everything about the movie is fantastic.  The voice acting is top notch with great work by folks like John C McGinley, Clancy Brown, CCH Pounder, Levar Burton, Xander Berkeley and led by Tim Daly’s Superman and Kevin Conroy’s Batman.  Conroy and Daly have great banter back and forth and feels like a buddy cop movie except the cops where costumes and one is an alien.

The movie is filled with wall to wall action that manages to include a ton of DC heroes and villains.   Supes and Batman have a vicious battle with Metallo, a brawl with a ton of DC villains controlled by Gorilla Grodd and eventually have to face off against the heroes working for Luthor, including Captain Atom and Power Girl.  The action is fantastic and definitely highlights how bad ass Batman and Superman are.  I guess the only downside is that you’ll mainly be seeing more Superman villains with Batman’s rogue gallery being pretty much represented by Solomon Grundy but I guess the Joker and company are too smart to be tricked into working for Lex Luthor, even if he is President.

If you have a hankering for some comic book action you should definitely check out this one, especially if you’re a fan of DC comics.  I just also want to mention how fantastic it is to have Kevin Conroy back all over the place as Batman and if you’ve never seen the Animated Series stop what you are doing and seek it out now.