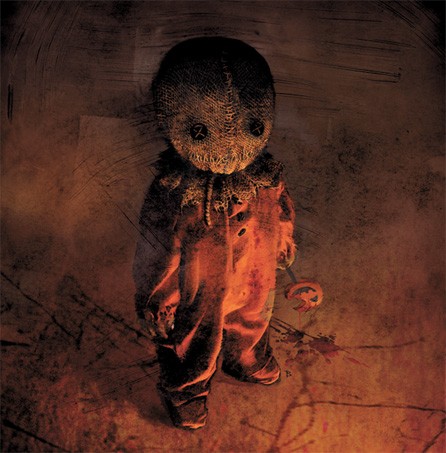 Trick R Treat has had a lot of trouble finding a release.  Originally it was supposed to come out in October of 2007 but it was pushed back and kept getting delayed until it finally arrived on DVD last week.  Hopefully people check it out because it’s an extremely fun anthology horror movie that is perfect for Halloween.

The movie features four stories that cut back and forth with each other.  There’s a school principal who has some unusual Halloween traditions, a group of girls looking for dates, some trick or treaters who investigate a local legend and a grumpy old man who gets a surprise visitor.  All of them are great but there isn’t really a standout.  At some point in each of the stories is Sam, a mysterious trick or treater with a burlap sack mask and is just generally creepy.

The movie does a great job of having the stories interact with each other and setting up payoffs for later. The characters from all four stories bump into each other, if only walking past each other on the street or driving past in a car.  You’ll also see events in one story that you’ll get a second perspective on later on in the movie.  The movie also does a great job of setting a creepy tone with fog covered streets, dead trees and Sam staring blankly at people.  There is however a strong sense of dark humor as well which is exactly the kind of horror that I like.

As far as acting, it’s pretty solid all around.  Anna Paquin is probably the most recognizable person in the movie and there’s also Leslie Bibb, Brian Cox and Dylan Baker.

I’m a sucker for Tales from the Crypt and other anthology series and this is a great addition to the genre.  If your horror classics are getting a little worn I would definitely recommend you check out this fun and original take on the genre.