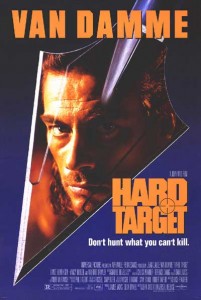 Chance Boudreaux knows New Orleans like the back of his hand, which proves extremely useful when he takes a job helping Natasha Binder find her lost father.

After saving her from a group of rowdy drunks outside a diner, Natasha, or Nat, hires Chance to be her guide and bodyguard.  He initially declines but finds out his merchant seaman union dues are overdue so he agrees to be paid the amount he owes.  The two start investigating and discover Nat’s father was homeless and had been handing out posters for a slimy strip club owner named Randall.  Randall also deals with businessmen Emil Fouchon and his parnter/partner in life(?) Pik Van Cleef.  The two get men with military experience to become prey for rich hunters and Nat’s father was their latest victim.

The local detective running the investigation, Mitchell, tells Nat and Chance that Nat’s father’s body has been found in a burned out building.  Chance goes to investigate and finds a dog tag but is jumped by Fouchon’s goons.  Chance comes to later and gives Mitchell the dog tag, which proves foul play was involved and Mitchell orders a new autopsy.  Unfortunately the medical examiner is on Fouchon’s payroll and he reports to Fouchon.  Fouchon and Van Cleef decide to head to a new city and start to wrap up loose ends.  They kill Randall, the medical examiner and try to kill Nat, Chance and Mitchell outside the police station.  Mitchell is the only one who is killed and Chance and Nat give chase on a motorcycle.  They catch up to the goons SUV and Chance pulls a daring maneuver to stop them; he stands on the motorcycle’s seat and jumps off just as the SUV hits it and then shoots at the gas tank to blow both up.  He then rejoins Nat and the two barely escape from Fouchon and Van Cleef by jumping onto a train.

Fouchon and Van Cleef gather a group of their goons and previous clients and start a manhunt into the Louisianna swamp for Nat and Chance.  Nat and Chance seek shelter with Chance’s uncle Douvee and gets a horse and his shotgun.  He leads the mercenaries toward a Mardi Gras float warehouse.  A massive shootout takes place with Chance taking out Fouchon’s men one by one.  Nat and Douvee arrive to help as well, despite Chance’s warning to stay away.  Chance takes down Van Cleef but Nat is held hostage by Fouchon, who is the last man standing.  Chance has a shotgun which could kill Nat as well as Fouchon.  Chance drops the shotgun but then launches into a flying kick that drops Fouchon, who is probably regretting his choice of weapons, a single shot Contender pistol.  Chance unleashes a vicious beatdown on Fouchon and finishes him by dropping a grenade down his pants.

Chance, Nat, Douvee and Chance’s magnificent mullet then head off into the sunset.