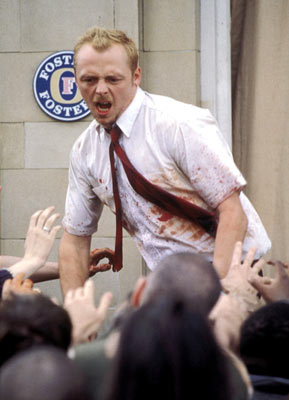 If you think you’re having relationship problems, try having them during a zombie outbreak.  That’s the trouble that Shaun is in when he goes out drinking with his best friend Ed to try and forget about his break up with girlfriend Liz and wakes up to find zombies running rampant, including two in his own backyard.

After trying and failing to kill them with his record collection, Shaun and Ed get a shovel and cricket bat from their shed and bash the zombies’ heads in.  They then decide to head to their pub, The Winchester, for safety and go pick up Shaun’s mom Barbara, his stepdad Phillip (who was bitten by a zombie), Liz and her friends David and Dianne.  The group all flees in Phillip’s Jaguar but he turns into a zombie and they have to abandon ship.

Shaun and Co. then make their way through backyards until they reach a wall with the Winchester on the other side, and also a huge crowd of zombies.  They decide to act like zombies to make it across and are coached by actress Dianne.  The group makes it safely across and try to make it into the Winchester but Ed gets a phone call and draws the attention of the zombies.  Shaun lures them away and the rest of the group scrambles into the pub through a broken window.

Shaun returns a few hours later and reveals his plan wasn’t anything much more than eating snacks and drinking pints until help arrived.  Unfortunately the zombies weren’t as dumb as Shaun thought and they followed him to the pub.  They start breaking in, but the group discovers the pub’s namesake rifle is actually real and start to fend them off.  Shortly though, Barbara starts to turn as well as she was bitten in one of the backyards the group crossed.  Shaun has to shoot her and then gets into a fight with David and a Mexican stand off breaks out.  David freaks out and attempts to flee out one of the front windows but is attacked and ripped apart by zombies.  Dianne grabs one of David’s legs and wades in after him.  Liz, Shaun and Ed attempt to hold back the horde but they start streaming in and Ed is bitten by his and Shaun’s roommate Pete, who Shaun shoots in the eye.  Shaun lights the bar on fire to keep the zombies back but accidentally leaves the rifle shells on the bar, leaving them only two shots but they also discover the door to the basement and quickly head down.

Seemingly trapped, Shaun and Liz make up and agree to shoot each other to avoid getting eaten.  Sharing a last smoke they find an elevator up to street level.  Ed volunteers to stay behind and hold of the zombies while Liz and Shaun head to the street.  Before they have to attack any zombies, the army arrives and destroys most of the zombies.

Shaun and Liz return to a semi normal life with the one exception of zombie Ed living in their shed, who Shaun has trained to not eat people and to play video games.