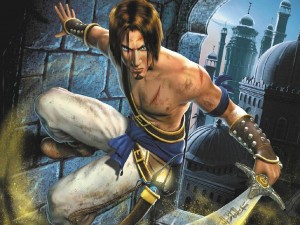 The first trailer is out for next summer’s big blockbuster Prince of Persia: The Sands of Time.  Based on the fantastic video game series, the movie looks like it’s following the basic premise of the first game where the titular Prince accidentally unleashes the power of the Sands of Time, a magical force that controls the flow of time.  The Prince gains possession of the Dagger of Time, which allows him to rewind time at will, and sets about to control the release of the Sand and stop an evil villain from gaining control and conquering the world with the help of a mysterious Princess.  The movie stars Jake Gyllenhaal, Gemma Arterton and Ben Kingsley and is the latest venture between Disney and Jerry Bruckheimer.  It looks like a fun summer ride, kind of a sword and sandals Pirates of the Carribean and the special effects look fantastic.  We’ll have to wait and see if it can finally break the video game movie curse.

Prince of Persia: The Sands of Time in HD