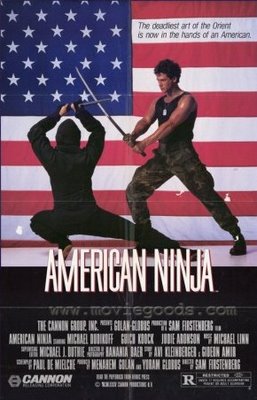 Forced into the Army after getting into legal trouble, Pvt. Joe Armstrong is eventually transferred to the Phillipines and gets involved in a deadly smuggling operation.  Supply convoys are being attacked by rebels and they strike when Joe is charged with driving one of the trucks.  Joe reveals amazing martial arts techniques and is able to stop the rebels but reinforcements arrive in the form of ninjas.  Joe retreats along with Corporal Hickock’s, commanding officer of the base, daughter Patricia, who was heading into town with the convoy.  The two head into the jungle and avoid detection thanks to Joe’s skills.

Back at the base, Joe is chewed out for letting the cargo get taken and letting three other soldiers die.  Joe is tasked with a bunch of menial chores and gets taunted by the other soldiers.  A few days after the incident Joe is challenged by Cpl. Curtis Jackson, who heard about Joe’s skills and wants to test them.  Joe easily wins and the two become friends, Jackson even helps Joe sneak out to have a date with Patricia.  At that date, Joe sees Hickock’s second in command, Rinaldo, talking with local businessman Victor Ortega, who was revealed to be behind the thefts.

The next day, acting for Ortega, Rinaldo orders Joe to drive a truck down to the local harbor, and right into an ambush.  Joe manages to fight off the goons and after a motorcycle chase through the docks, he hides under one of the goons cars and manages to get into Ortega’s compound, where he discovers a cache of stolen weapons.  Joe is discovered by Ortega’s ninjas, who he manages to fight off and then escapes thanks to the help of Ortega’s gardener Shinyuki.

Back at the base, Joe tries to explain what happened but is arrested by Rinaldo for losing valuable government property.  While Joe is in the base prison the evil leader of the ninjas, the Black Star Ninja, sneaks in and kills all the guards and tries to kill Joe.  A chase ensues and the Black Star Ninja is eventually chased off by Jackson and some MPs.  Joe explains to Jackson what happened and the two head to Hickock’s house to get help.  Unfortunately it turns out that Hickock is in league with Ortega as well.  Ortega has the Black Star Ninja kidnap Patricia, since Hickock was getting cold feet about the operation.  Joe sees this and chases after Ortega’s car but is forced to fight off Rinaldo and some of his men in jeeps.  Joe fights them off and Rinaldo drives off the road into a tree, exploding.  Joe sneaks back onto Ortega’s compound and runs into Shinyuki again, who reveals that he is the one who trained Joe in martial arts and found him when he was a baby.  The two got separated following a bomb blast by the US Government and Joe lost his memory.  The two suit up to stop the Black Star Ninja and Ortega.

The two begin an assault while Ortega is trying to sell a rocket launcher to some buyers.  The two fight off the ninjas and Jackson and Hickock arrive with the Army and full fledged battle takes place.  Shinyuki is killed by the Black Star Ninja and Joe confronts him for a final battle.  Both ninjas use every trick they have, with the Black Star Ninja even pulling out a laser.  Joe eventually defeats him and Jackson uses the rocket launcher to blow up Ortega’s helicopter, ending the smuggling operation and stop the reign of the evil ninjas.

Action Hero of the Week: Cole

Everything Action Theater: Enter the Ninja

One thought on “Real Men of Action: Joe Armstrong”