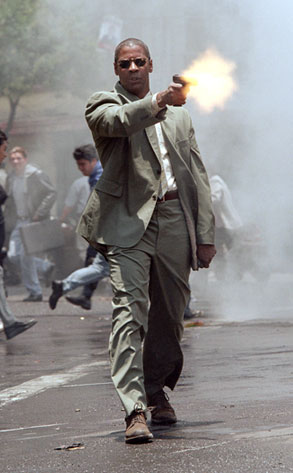 After years of dirty CIA work, John Creasy is pretty much dead on the inside and is an alcoholic.  However, when he accepts a job from his old friend Paul Rayburn, he gets a chance at redemption and one more opportunity to kick ass.

In Mexico City, there is a wave of kidnappings happening where children of wealthy families are being taken and held for large ransoms.  The man behind them is simply known as “The Voice”, who has a web of corrupt officials and goons working for him.  The wealthy Ramos family hires Creasy to be the bodyguard for their daughter Pita.  Creasy could care less but Pita’s preciousness eventually wins him over and the two become close friends.

One day after dropping Pita off at her piano lessons, Creasy sees a suspicious-looking car circling around the block as well as a pair of police cars blocking one end of the street.  As Pita leaves the piano teacher’s house, Creasy fires a shot and tells her to run and a firefight breaks out.  Creasy manages to kill four of the kidnappers but is shot multiple times and Pita is taken.  The Voice demands $10 million for Pita’s return and Samuel Ramos delivers the money to the designated spot.  The Voice’s men are ambushed however and he calls back to say that Pita is dead.  Creasy hears this and after healing up, vows to kill everyone involved.

Creasy buys a small arsenal of weapons and starts to brutally take out corrupt police officers and officials until he learns that the kidnapping was actually set up by Samuel Ramos and his lawyer Jordan Kalfus in order to get insurance money as Ramos was going bankrupt.  Creasy gives Ramos a gun with one bullet and Ramos takes his own life.  Creasy then gets the last piece of the kidnapping puzzle as he learns that the Voice is Daniel Sanchez.  Creasy breaks into Sanchez’s brother’s house and tortures him as he calls Sanchez.  Sanchez reveals that Pita is still alive and that he will trade Pita for Creasy and his brother.  Creasy and Lisa Ramos drive to the meeting spot and the exchange takes place.  Creasy, who had been shot earlier, dies in the back of Sanchez’s car but Pita is safe and he gets the last laugh as Detective Manzano, who had been following and helping Creasy, shoots Sanchez at his home and leaves him floating in his pool.

One thought on “Real Men of Action: John Creasy”