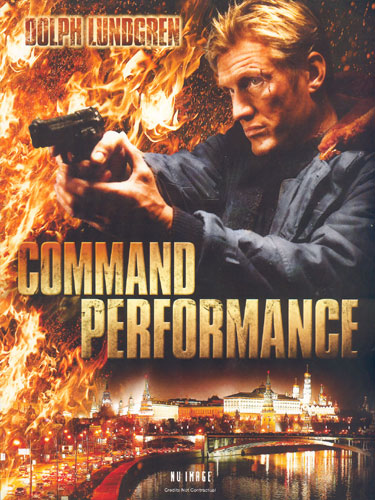 Dolph Lundgren is a man of many talents and he shows most of them off as he writes, directs and stars in Command Performance, which recently came out on DVD.  The movie is a complete throwback to the late 80’s and early 90’s when the world was obsessed with anything “Die Hard in a…”  In this case we have Die Hard in a Russian concert hall.  The newly elected Russian president had two daughters who are huge fans of American pop princess Venus so the president arranges a special charity concert that features her, along with a number of other acts including rock band CMF and their drummer Joe (Lundgren).  Everything seems to be going fine until terrorists take over the concert hall and start making demands.  Joe, who had been sneaking a cigarette at the time, takes it upon himself to help rescue the president and stop the terrorists.

Command Performance is definitely not going to win any acting oscars, especially when most of your actors speak English as their second language and your co-star’s only real claim to fame is being on the Pussycat Dolls reality show.  Dolph doesn’t take things to seriously and drops some great one liners.  He also seems to be obsessed with arterial blood spray as everyone who is killed sprays blood like a fountain.  There are some great kills with the best probably being when Dolph pretty much kills a terorrist with the power of rock.

All in all, Command Performance is worth a rent if you’re looking for some competent Die Hardesque action, although I would probably rank it below some of the others in the genre like Sudden Death.  The acting is laughably bad, the villains are clearly evil and you can see the plot coming from miles away but it’s still fun.  Grab some friends and some drinks and get ready to get Dolphified.