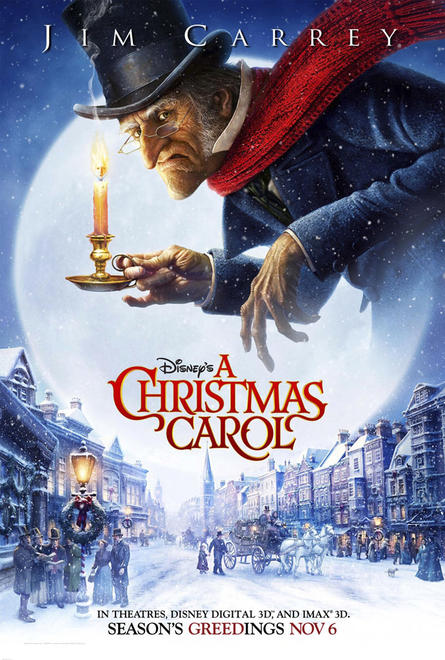 Robert Zemeckis brings us another 3D motion capture extravaganza with his take on the classic Dickens story, A Christmas Carol.  It’s a little effects bloated but is still a fine treat for the holiday season.

Jim Carrey stars as Ebenezer Scrooge as well as the Ghosts of Past and Present.  As Scrooge he gives a fantastic performance and captures all the sides of Scrooge, from miserly and cold to happy and outgoing.  Bob Hoskins, Gary Oldman, Cary Elwes, Colin Firth and Robin Wright Penn fill out the supporting cast but are pretty much overshadowed by Carrey. This also kind of effects the story as well as I think the side story of the Cratchit family is more brief than in other adaptations.  It’s also a little distracting hearing Carrey as the Ghosts as he throws out some crazy accents, which conflict with his more understated performance as Scrooge.

Zemeckis really uses the 3D to his advantage in A Christmas Carol.  There are fantastic sweeping shots of Victorian London that actually might give some people motion sickness, I know I felt a little like I was going over a hill on a roller coaster.  He also uses fog extremely well, although the falling snow is a little fake.  As with most of the 3D movies that have come out recently, the 3D really gives a great sense of depth to the scenes, in particular there were many scenes where you look through windows and they look extremely good.  The only thing Robert Zemeckis hasn’t solved yet is making the characters not have eyes as dead as Kardashian sister’s.  It gets slightly better with each movie but it still feels a little creepy.

Another thing that I really enjoyed about the movie was the fact that Zemeckis took a darker approach to the story that is more in line with the original.  You kind of know what you’re getting into when the movie opens on Jacob Marley’s corpse.  You also have to watch the Ghost of Christmas Present die and then see Scrooge tormented by the personifications of Ignorance and Want.  Scrooge is also chased by a demon carriage driven by, I think, the Ghost of Christmas Future.  That sequence is pretty extraneous as Zemeckis seemed to think he needed a big action set piece before the finale.  Scrooge is shrunk down and chased around London, finally ending up in a pawn shop where he sees his former housekeeper selling off his possessions.  It’s exciting for sure but just doesn’t really serve any purpose plot wise.  The rest of the ghost sequences are well done and I especially liked the Christmas Present sequence where the ghost and Scrooge travel around London in Scrooge’s den and the floor turns transparent.

Overall I think this is a fine adaptation of Dickens’ classic story.  It’s not quite as fun as the Muppet or Disney versions but it has more of the sensibility of the original, a great lead performance from Carrey and some fantastic cinematography and effects.  If you’re looking to get the holiday season started this year, you could do a lot worse than this.