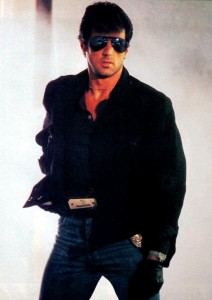 When you have a criminal who especially needs to get his ass kicked, you need to call in Cobra.  Part of the “zombie squad”, Cobra takes down to baddest of the bad with extreme predjudice.  Our first taste of this is when Cobra is called in to end a hostage situation at a supermarket.

Making his way inside, Cobra manages to taunt the hostage taker while drinking a Coors before blasting him away.  The criminal tells Cobra a New Order is coming and then dies.  Cobra gets chewed out by his superiors but he’s too bad ass to care.

Meanwhile, a number of murders have been occuring in the city by member of the New Order, who attack people with axes.  They are led by psychopath The Night Slasher.  There are never any witnesses until model Ingrid Knudsen sees the Night Slasher and crew murder someone and escapes.  The Order tries to kill her but she survives and is placed under Cobra’s protection.

The Order tries a few more times to kill Ingrid, which Cobra manages to fend off, and Cobra decides to head into the country until they can figure out who is behind it.  Cobra, his partner Gonzales and another officer stay at a small hotel.  The other officer is a mole for the Order however, and calls in the entire gang.  Ingrid, Cobra and Gonzales are ambushed the next morning and barely escape in a pick up truck.  Cobra manages to fend off and kill many of the gang members, who are pursuing on motorcycles.  The truck is damaged by gunfire and Ingrid and Cobra flee into a nearby steel mill with the remaining gang members in pursuit.

Ingrid goes to hide and Cobra kills off all the gang members except the Night Slasher, who he faces off with in vicious hand to hand fight.  Cobra eventually gets the upper hand and impales the Night Slasher on an industrial hook and then pushes him into an oven.  The rest of the force arrives to clean up and arrest any surviving members and yet Cobra is again chewed out by his boss, Detective Monte, but Cobra punches him out and then heads off into the sunset with Ingrid on a chopper.