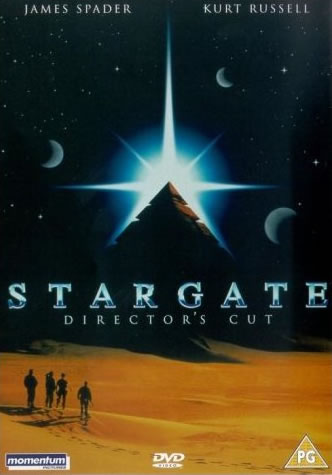 Thus far in this new segment we have covered several fantastic pure action flicks that you can’t help but enjoy. Everything from future ass-kickery to the most amazing chase sequences ever made. This week, I decided to choose a more adventure based film. I wanted something that was more about the journey being taken then the ass that was being kicked. With this in mind, I began to look through my film collection and my walking fingers came to rest on the case of one of my favorites, Stargate.

The 1994 film Stargate is the tale of an amazing adventure that begins when Egyptologist Daniel Jackson (James Spader) is brought to an underground military base where his considerable knowledge is instrumental in the decoding of symbols on a series of Egyptian cover stones. It turns out the stones are used to allow a alien device known as the Stargate to “dial” another Stargate and open a doorway to another planet on the other side of the universe. A team led by Air Force Colonel Jack’ O’ Neil (Kurt Russell) and Jackson to travel through the gate, across the known universe to a distant planet. Arriving on the planet, they find a culture enslaved and ruled by someone posing as the Egyptian sun god Ra. Soon, Ra captures the team and takes control of a nuclear weapon brought to the planet in case of the discovery of hostile aliens. Jackson and O’Neil, with the help of the indigenous people have to escape and must fight Ra and his army of warriors to save Earth from being destroyed.

Right off the bat I want to say that I am aware that this film is not the best film ever but it has one thing that all films wish they could boast; watchability. Like The Fifth Element of two weeks ago, this is one of those films that I can watch over and over again and never get sick of. It is always entertaining, no matter how many times I see it. I think one of the main reasons for this watchability is the amazing production design in this film. The set pieces are so fantastic and the camera shots and pans give the audience a grand opportunity to experience it all. It is one of the most visually stunning films I have ever seen. Color wise, sure, not to amazing. It takes place in the desert wasteland after all, and yet the slave village, the pyramid and the space ship sets are so brilliantly constructed. 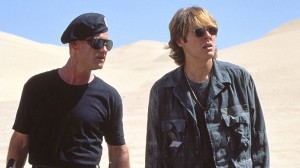 The cast is pretty well constructed too. You have to love the combo of tormented action hero paired with a out of place science geek. Only if they work together they can save the day. Russell and Spader play their parts perfectly in this amazing sci-fi adventure tale. The supporting cast in this film are just as important. Most of them have to play characters that are completely alien to us and yet someone we can sympathize with.

Communication and understanding become a big theme in this film. When the team first arrives on this new planet and meets the indigenous inhabitants, there is a event, a sandstorm to be exact. The gates are closed and locked but due to their lack of understanding the commandos take villagers hostage to try an escape. Thanks to some hand signals and understanding, the commandos are shown the sandstorm as it approaches. I enjoyed how “Kawalski” apologizes by bowing and then shrugs. It sums all the confusion up perfectly and I couldn’t stop laughing.

One of my favorite parts of this film is the mythology that it both creates and modifies to fill out the plot. It is very intelligently done using a dying alien species came to earth and uses its extensive knowledge to appoint itself ruler and essentially becomes the basis for the Egyptian god Ra. Its a pretty large tale, but the way its explain makes it seem just possible. Then due to a rebellion, the Stargate on earth is buried to prevent further spread of the rebellion and that is the reason these aliens were not seen as aliens but as gods of myth in our history. The movie has a fantastic back story and it is create very intelligently using both myth and fact.

On a final note I want to say that the visualization of traveling through the Stargate was mind blowing as far as special effects go. The vortex itself was not so much. It looked like the Dr. Who ‘time vortex’ and the Star Wars ‘warp speed’ boned and created the first Stargate transport effect. You will find a bunch of cheesy effects in the classic action genre but you know what, I think in this film they actually add to its appeal. I can say that in the A2 Classic realm, this film, while only 16 years old, is one of my all time favorite classics. If you haven’t seen it yet, I highly recommend you get your hands on the blu-ray version, it looks great and sounds even better! As always, enjoy this adventure classic and keep your eyes peeled for more.