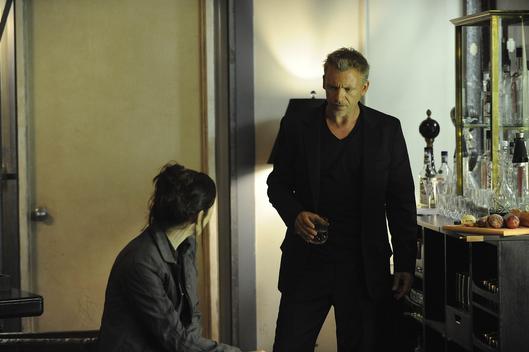 Jack and Renee continued their quest to find the nuclear rods as Renee went back to Vladimir’s garage while Jack called CTU and again voiced his concerns about Renee, since she’s clearly unstable.  Hastings didn’t want to jeopardize the mission but Jack made a deal with him to figure out a way to pull Renee out without blowing their covers.  Cole was then sent out to meet up with Jack to set up his disguise and their back up.  Renee and Vladimir, meanwhile, ironed out the details of the deal.  Vladimir would send a few of his men to meet “Ernst Meir” who would transfer $5 million to their account as a good faith payment.  Vladimir would then make some calls and put in a counter bid for the nuclear material.  Vladimir also wanted something extra from Renee and, despite Jack’s urgings not too, she went dark and slept with him. If that wasn’t enough, Vladimir ordered his men to kill Jack as soon as they had the $5 million.

Meanwhile at the UN, President Taylor recieved news that the BBC had gotten footage of the brutal arrests Hassan’s men were conducting and also that a number of the countries supporting the peace treaty were thinking of pulling out.  President Taylor decided to address the delegates from the supporting countries to urge them to remain in the talks.  President Hassan got an update on the situation from his head of security and learned that the cousin of one of his top advisors was working with Farhad.  Hassan ordered the arrest of this man and demanded he be taken to their embassy for questioning.  His head of security was not to pleased with this and arranged to meet with Hassan’s daughter into possibly talking some sense into him.

Dana’s problems continued to distract her from the mission at hand.  She found a suitable target for Kevin and his loser friend, a police warehouse with a recent delivery of $120,000 in drug money.  She made up a fake ID card and told Kevin she would manipulate the security so they could get in and out with detection.  Wise ass Arlo was becoming suspicious and saw her meet with Kevin on the security camera.  He also provided a fantastic Chloe moment by asking if she noticed anything funny with Dana and Chloe responding that maybe she’s just tired of him coming onto her all the time and he’s lucky she didn’t call human resources on him.  Arlo then said maybe Chloe was just jealous and she came back with a sarcastic “oh yeah, I wish you would constantly stare at my ass all the time.”  and then walked away.  Arlo, of course, checked out her ass.

Jack met up with Cole and changed into his disguise, kind of looking like he was going to go hold Colin Farrell hostage, and went to meet with Vladimir’s men.  They tested his German and then Jack started the transfer.  After it was done, Vladimir’s men went for their guns but were stopped by Cole and his sniper rifle.  Jack then called Vladimir and threatened to kill his last man if they didn’t meet.  Vladimir agreed and Jack and his hostage headed off.

Wrapping things up was the saga of Josef and his radiation soaked brother.  Their hostage doctor ran some tests and prescribed a regiment of drugs that could potentially flush the radiation from his system but it wasn’t a guarantee. Josef agreed to treat his brother at their country home but before he could finish getting the instructions, two of his father’s men barged in and killed the doctor, taking Josef and his brother back to their father.  Sergei was not pleased and after beating up Josef decided to teach him a lesson.  He pulled out a gun and threatened Josef with it before killing his other son.  He then warned Josef to never disobey him again.  What will happen when Jack and Vladimir meet face to face?  Can Dana keep covering up Kevin’s plot?  Will the peace talks go down the tubes?  We’ll have to find out next week.