Sorry about the late post guys but I will make it up to you with two in one day, how does that sound? 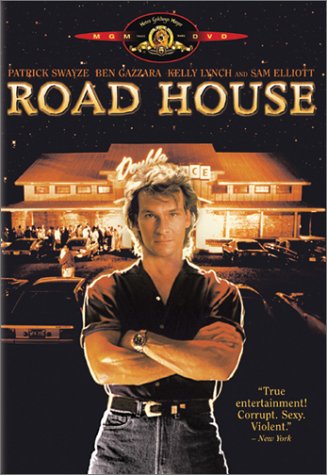 In the past 7 posts we have discussed work from notorious A2 (action & adventure) actors such as Willis, McQueen, Van Damme, Chan, Russell and Lundgren. So there I sat, thinking of what action actors films I haven’t covered yet and I remembered one of my favorite actors who we recently lost, Patrick Swayze. Upon thinking of all the films in his career, one stood out as my favorite of all. I am sorry Black Dog fans but I had to go with the Swayze brawler classic, Road House.

Directed by Rowdy Herrington, the 1989 film Road House tells the tale of Dalton (Swayze), an expert “cooler” — a barroom bouncer who can break up fights without getting himself killed in the process. Frank Tilghman, the owner of the Double Deuce in Jasper, Missouri, has hired Dalton away from a bar in New York City, because Tilghman needs someone who can handle the nightly outbreaks of violence at the Double Deuce. Once arriving in Jasper Dalton meets up with a familiar face. The band, protected from the violent crowd by a metal cage, is led by Dalton’s old friend Cody (legendary blind blues guitarist, Jeff Healey). Dalton is injured in a huge brawl during his first week on the job and is treated by Elizabeth “Doc” Clay (the gorgeous Kelly Lynch), the local doctor. Dalton and Doc soon fall for each other, and this, amongst other things, angers Brad Wesley, a crime boss that Doc was once involved with. Wesley is responsible for the rampant corruption in Jasper, as well as a lot of the violence at the Double Deuce. With the local sheriff in his pocket and the townsfolk in fear, Wesley has complete control of the whole town. Wesley is out to get rid of Dalton buy any means necessary including using his own private army of goons to harass and hurt Dalton and the friends he has already made within Jasper. What ensues is complete and utter mayhem within this small Missouri town. 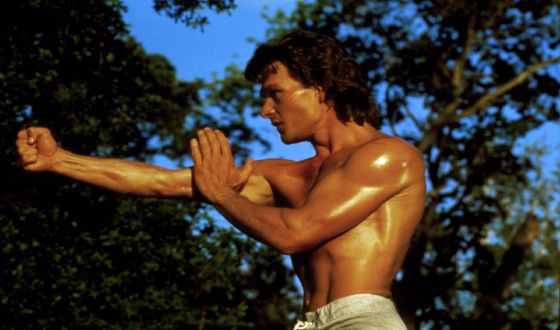 There are a couple of things about this bar brawl of a movie that I have noticed on my most recent viewing. First of all, at the beginning there is a lot of hidden hilarity and clever statements that I didn’t notice right away. You have the fantastic Patrick Swayze line in response to a offered plane ticket: “I don’t fly, its to dangerous.” Little do we know that later he will be in gun, knife and fist fights that would make a ordinary man pee. There is also the nasty message written on the wall in the Double Deuce that the owner Tilghman, played by Kevin Tighe promptly changes to say “For a great Buick call 555-7617.” Take a guess at what word Buick used to be. There are a bunch of funny little things like this built into the frame of this semi violent super brawl of a film.

Another thing, the soundtrack in this film, while not mind blowing, is perfect for the type of movie it is. This blues-rock fueled film includes the sounds of amazing blind blues rocker Jeff Healey, the gentleman who is/plays the singer/lead guitarist of the band at the Double Duce in Road House. His style of blues is soulful and yet rock driven which fantastic for dancing or fighting and makes it a perfect fit for this film. When a song by the Jeff Healey band is not bursting through the speakers, the soundtrack for this film is filled out with other mind blowing rock of the time and with the occasional film score to heighten a dangerous mood, for example, the beach fight pitting Dalton against Jimmy (Marshall Teague).

That beach fight brings me to another interesting bit about this film. Now every teenage girl for several generations after its realize has heard of, seen and loves the film Dirty Dancing. Swayze plays a dance instructor in that film who takes a young woman going to the summer getaway under his wing and slowly falls for her. In Road House, during the beach fight I mentioned earlier, there are several points through out this whole seen from the explosion to the fights finish that you will see Swayze’s graceful dance training come into play in the fighting, and if it weren’t such a gruesome scene, it would be almost beautiful to watch him fight. I bring this up because I thought the traces of Dirty Dancing in this film were interesting due to the complete moral flip flop that those two films have and that the fact, even 2 years after DD is released he still is displaying his grace from the dance sequences. 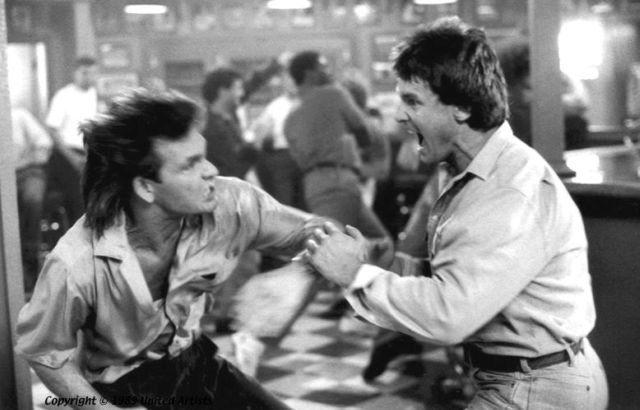 In conclusion, I would say that this is one of my all time favorite 80’s movies, one of the best fighting films and one of the most recognizable Swayze pictures. I highly recommend that if you haven’t seen it, you should rent or buy it considering the inexpensive price tag at the moment. If you have seen it, maybe its time to bust it out again for some amazing moments from the late, great Patrick Swayze (RIP) and supporting parts by the fantastic Sam Elliot and the beautiful, mostly naked Kelly Lynch. Per usual, I hope you pick it up, kick back and throw on this A2 Classic. Cheers!