Universal Soldier Regeneration is out on DVD this week and, while it’s the fifth film in the series, it’s only the third one to star Van Damme.  Confused? That’s why we’re here. 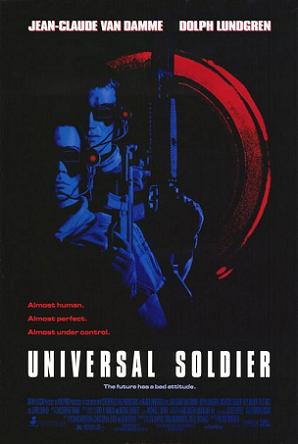 Back during the Vietnam War, Private Luc Devreaux finds out that his commanding officer, Sgt. Andrew Scott, has gone insane and is murdering and cutting the ears off of the residents of a small village.  Devreaux tries to stop him and they end up shooting and killing each other.  A special forces team arrives the next morning and puts their bodies on ice and the incident is buried. 30 years later there is a hostage situation at the Hoover Dam and and Devreaux and Scott are sent in, now mindless Universal Soliders.  They efficiently end the hostage crisis but both men start experiencing memories of Vietnam.

Roberts and Devreaux flee to Devreaux’s family farm and he finds his parents but Scott manages to survive the explosion and pursues them.  A vicious fight ensues between Devreaux and Scott and Scott gains the upper hand because of muscle enhancers he’s been injecting.  Devreaux manages to steal one from Scott and evens up the fight after injecting it.  Devreaux impales Scott on a hay harvester and finishes him by turning on the machine to grind him up. 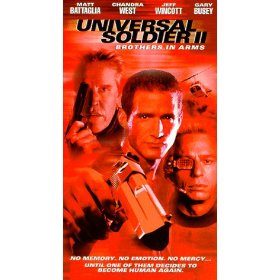 A direct to video sequel of the first film, this and US III where later made non-canonical by US: The Return.  The movie features the same characters as the first movie but different actors.  Luc Devreaux finds out that he has a brother and then must rescue him and Veronica Roberts from the bad guys. 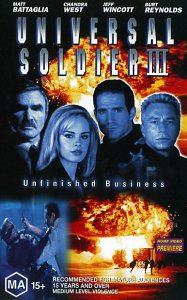 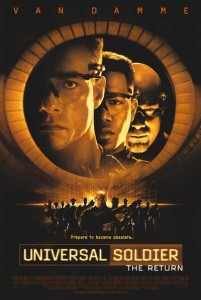 The actual sequel to Universal Soldier, we find Van Damme’s Luc Devreaux is now a technical assistant for the new Universal Soldier project.  He and his partner Maggie run combat training missions with the UniSols in order to make them more independent and efficient.  The UniSols are able to think more for themselves but are connected and controlled by a AI system named SETH or Self Evolving Thought Helix.  Due to budget constraints, the UniSol program is being going to be shut down but SETH won’t allow it and takes control of the UniSols and kills the technicians trying to shut him down.  With the help of a rogue hacker, SETH manages to create a human body for himself and kidnaps Luc’s daughter.  Luc has a code that will stop the automatic shutdown of SETH that has been activated.  Luc manages to infiltrate the where the UniSols are operating out of and takes on SETH.  After a fierce battle, Luc manages to freeze SETH with liquid nitrogen and shatter him.  Unfortunately a bomb that was placed to kill the UniSols was deactivated but Luc manages to get his daughter out and shoot the bomb just as the UniSols are marching out, killing them all. 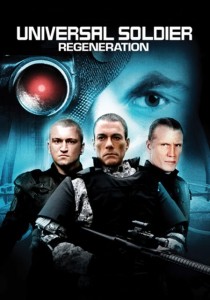 The newest film in the series finds Luc Devreaux as the only man who can stop a terrorist group from detonating the remains of the Cherynobyl nuclear plant.  The terrorists are lead by a Next Generation Unisol and they’re also joined by a cloned and upgraded version of Andrew Scott. You can read the EA review of this movie here.

Action Hero of the Week: John