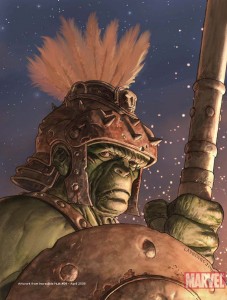 Marvel continues with their DTV animated movies, this time with an adaption of the Planet Hulk storyline from a few years ago.

Shortly before the infamous Civil War, the Illuminati of the Marvel Universe including Reed Richards, Iron Man, Dr. Strange, Professor X, Black Bolt and Namor decide that after the Hulk’s latest rampage he’s too much of a threat to Earth and, after sedating him, launch him into space.  They have found a world that is a peaceful wilderness with no intelligent life and hope that Hulk will be happy there.  However, the navigation of the ship malfunctions and Hulk instead crashes on the planet Sakaar, ruled by the evil Red King and host to vicious gladiator battles.  The Hulk is teamed with a number of captives and must fight in the arena to earn his freedom.

The movie is definitely one of the better Marvel animated movies.  There’s lots of fun action as Hulk defeats round after round of robotic and beastly opponents in the arena.  There’s also great cameos by Thor and Beta Ray Bill.  However, Hulk is really mopey during the entirety of the movie and he just reluctantly agrees to help the planet toward the end but you’re never really sure why.  There’s also nothing really original about the story.  It’s Gladiator with aliens which they sort of squander as that is one of the most awesome ideas ever.  The entire movie feels kind of rushed and, if you haven’t read the comics, would probably be very confusing since, besides some flashbacks, they don’t really explain or explore any of the characters.

If you’re looking for some animated Hulk action I would definitely recommend you check out last year’s Hulk Vs. first as it’s action packed and everything you want from the Hulk.  This is an average entry into the Marvel animated universe that has some fun moments and hopefully we’ll get a movie based on World War Hulk where the Hulk beats the shit out of pretty much every other Marvel hero.