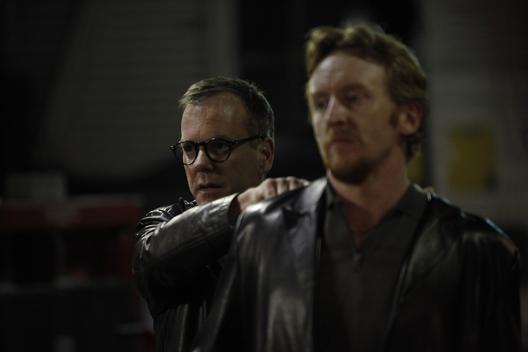 Things reached a boiling point on last night’s 24.  Jack aka Ernst arrived at Vladimir’s garage and demanded that the deal go through.  Vladimir agreed to make some calls but Jack wanted a quick pow wow with Renee to tell her that he was pulling her out.  Renee argued that the only reason Vladimir was doing this was because of her and went back into his office with him while Jack waited outside.  CTU was ready to spring at any moment since Cole and the backup team was following close behind Jack.

Speaking CTU, Dana’s potentially career ending deal with her loser ex boyfriend/ex con Kevin was finally executed as Kevin and his slacker friend entered the police evidence warehouse and found the $120,000 in drug money that Dana had promised them was there.  Not satisfied with this however, Slacker friend started rummaging around the other evidence bins, wasting valuable time that ultimately made them get cornered by the nightly patrolman.  Beating him with a baseball bat, Kevin and Slacker escaped the warehouse but with more heat on them than Dana had wanted.

At the UN, President Hassan is growing more and more paranoid, as he continued to order arrests in his home country and was not satisfied that one of his advisor’s wasn’t working with his brother.  Tarin, Hassan’s chief of security, tried to talk Hassan into letting it go and refocusing on the peace talks but Hassan lied and dismissed him and ordered another of his security men to order the arrest of his advisor’s wife and children in order to get him to talk and also to arrest Tarin.  Tarin, meanwhile met with Hassan’s daughter and she agreed to help but their meeting was cut short by Hassan’s security, who arrested Tarin and said that Hassan cannot be bothered by anyone, not even his daughter.  President Taylor, meanwhile had managed to buy some time by convincing the representatives of the countries overseeing the peace talks to “stay the course”.

Back at Vladimir’s garage, Vladimir had run through his list of names and come up empty.  Unbeknown to him though, he had inadvertently called the man who had the nuclear rods, Sergei, who was not very happy that the information had gotten out and ordered Vladimir dealt with.  Vladimir was content to settle with the $5 million he had gotten from Ernst and having Renee back but Renee started to freak out and demanded that Vladimir call everyone again.  An arguement broke out that ended with Renee stabbing Vladimir to death.  Jack heard the commotion and came to investigate and Renee accidentally stabbed him in the gut.  Fortunately since it wasn’t a taser, Jack was fairly unfazed and even pulled the knife out and killed Vladimir’s second in command when he burst in.  Jack managed to deal with the rest of Vladimir’s men and covered for Renee when he reported to Hastings and CTU.  With their main lead dead, the only thing left was for CTU to sweep the garage for evidence.  However, Sergei’s men arrived first and Jack got the idea that he would allow himself to be taken, figuring CTU would be able to track him and they would be able to find the nuclear rods.  Renee hid in the bathroom and Jack surrendered to the goons.  Unfortunately when CTU arrived a short while later, Renee learned that CTU had seen no one come in or leave the garage and that meant that Jack was missing and would have to fend for himself.