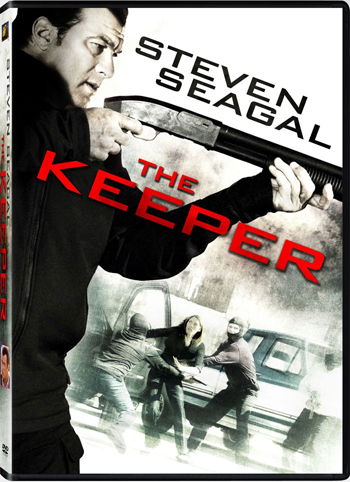 You gotta hand it to Steven Seagal, the man is a work horse.  Between being a deputy sheriff and Buddhist zen master, he’s also still cranking out movies, the quality of which varies greatly.  One of his recent releases, The Keeper is actually fairly good by Seagal standards.

Seagal is Roland Sallinger, an LA cop who is betrayed by his partner after a drug bust and is left for dead.  But Sallinger is “Hard to Kill” and survives, thwarting his partner’s second assassination attempt and begins his long recovery process.  Despite getting back to fighting shape, Sallinger is forced to retire and then accepts a bodyguard/security job from one of his old cop friends.  It’s Seagal’s attempt at Man on Fire and it’s nowhere near as good as that film but it’s not the complete failure that Seagal’s recent DTV movies have been (*cough* Attack Force *cough*)

In typical Seagal DTV fashion, everyone in the movie is a horrible actor and are either foreign actors who speak English as a second language or people just dragged off the street.  This makes Seagal seem like a master thespian by comparison.  Seagal is actually reminiscent of his old self in this one however, he’s not trying to have a horrible accent and he doesn’t have to be dubbed.  He also brings back his signature brand of fighting, which consists mainly of breaking dude’s arms the wrong way.

The action sequences are pretty typical; Seagal akaidos and shoots his way through various goons until a final match-up with the head goon.  It’s not breaking any new ground but it’s servicable and well above some of Seagal’s other recent efforts where there is so much editing you have no idea what the hell is going on.  Also, if you’ve wanted to see Seagal snipe guys with a .50 calibur, this is your movie.  There’s also some great so bad they’re good lines like, for instance, when Seagal is up against the main goon and the goon says “Mi casa es su casa, mother fucker!”  Brilliant.

While this isn’t anywhere near the upper echelons of Seagal’s movies like Under Siege, Marked for Death and Hard to Kill it is also better than most of his recent DTV movies and probably even above stuff like Half Past Dead.  Most people probably don’t even know Seagal is still making movies but if you’re a fan of him like we are than The Keeper isn’t a bad hour and a half.

Everything Actioncast Ep. 53 “Steven Seagal is…”