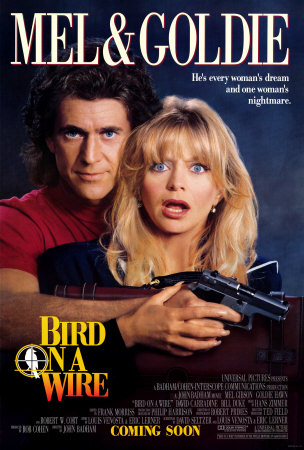 Looking back we have gone through quite a bit of your stereotypical action films with your stereotypical action stars. This week I took a look at your regular action stars, chose one and decided to go with a not so mainstream action film from them. This film, while not particularly note worthy, even within its own time period was one of my favorite films as a kid action fanatic mainly because it encompassed so many action elements in one place with out seeming garish about. It also is quite funny and charming for an action film.

Bird on a Wire is the 1990 John Badham directed film about Rick Jarmin (Mel Gibson), an FBI informant who helped convict a drug dealing FBI agent named Eugene Sorenson (David Carradine) and was placed in the witness protection program. 15 years later, his former fiancée Marianne Graves (Goldie Hawn) crosses paths with him at a gas station in Detroit, Michigan. Rick refuses to recognize Marianne because Sorenson has since been released from prison and he does not want to put Marianne’s life in danger as Sorenson and his partner Albert Diggs (Bill Duke) are now out for revenge. Marianne has blown Rick’s cover, and he makes a frantic call to his relocation contact for a new identity — only to discover that his old contact has retired. What’s more, his new contact, Joe Weyburn (Stephen Tobolowsky), is in league with Diggs and Sorenson. Just as Marianne prepares to confront Rick, Sorenson and Diggs show up at the gas station with guns blazing.This gas station gun-down heartbreakingly kills Rick’s kindly old boss at the gas station, destroys his latest cover identity and sends Rick and Marianne on the run after the murder is made to look like they did it. What ensues is a high speed action and adventure story that takes you from a catwalk of a high rise to a horse farm and back to a city zoo, all the while danger lurks around every corner in the form of David “Bill” Carradine.

I would like to start with the fact that Mel Gibson makes a fantastic action hero. At this point of his career he is believable as the regular guy put in a bad situation and doing his best to protect his loved ones while he tries to fix the situation. He doesn’t have any Jet Li style perfect fighting moves or Terminator invincibility, he makes due with what he has and gets the living crap kicked out of him because of it. It makes for an amazingly believable protagonist in this tale of desperation and overcoming of hopeless odds. 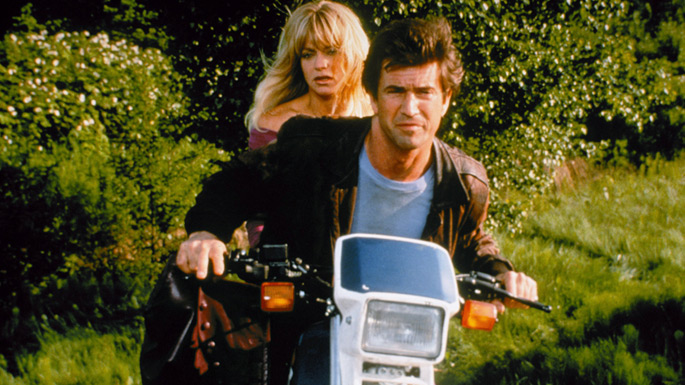 As I said earlier, I really dug this film because of all the action elements it brings to the table. Its got a kick arse motorcycle chase through the back alleys and streets of an urban environment. It also has a epic car chase scene involving several cars and a train. There is a real good sense of believable comedy to the film even though it is a tough and dire situation that the main characters are in. The leads do a really good job of playing off each other to make a really well though out and comedic dialog. There is tragedy in the fact that friends of the protagonist are killed left and right. It creates a big sense of hopelessness that the characters need to overcome. As a part of witness protection, Jarmin has to go back through some of his other identities through out the film and that allows Gibson to play several very different roles. There are lots of animals which is always a good contrast in action films. David Carradine, as usual plays a really good baddie. Finally, the film has a real bang up soundtrack by ze great Hans Zimmer.

One thing I can honestly complain about is the marketing for Bird on a Wire. While I cant lay this on the director or the stars. If you look at most of the posters and the images that you can find of some of the DVD cases and such you will see that they have MEL & GOLDIE real big at the top to catch the attention. While I understand that the staring couple is one of the films biggest draws, I hate that they really took it overboard with the promotion and that actually overshadows the fact that the movie is really quite good on its own. 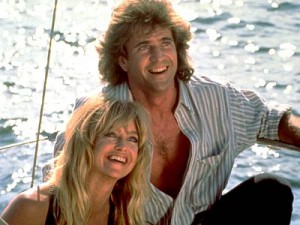 As far as post production on Bird on a Wire goes, the editing is not to bad but not terribly notable. cinematography is not to bad, with good camera angels, coloring to set the proper tones and decent effects. The sound is about average and everything about the back side of the film screams normal action flick. What makes this film stand out is the chemistry of the cast members thrown into this ridiculous action packed situation the GH is not made for and MG seems destined to be a part of. In short I would have to say this is one of the most underrated but entertaining films of the early 90’s and certainly both Goldie Hawn and Mel Gibson’s careers. I definitely recommend checking it out if your looking for some good old action entertainment. I believe that comcast has it ala ON DEMAND right now and Netflix is sporting it in the Watch Instantly section. I am sure you can also pick it up at a local rental joint as well but in any case I hope you enjoy what is one of my favorite underrated action films of the 90’s. Take care and as per usual, kick back, relax and enjoy some action… films.

One thought on “Action Adventure Classics: “Bird on a Wire””