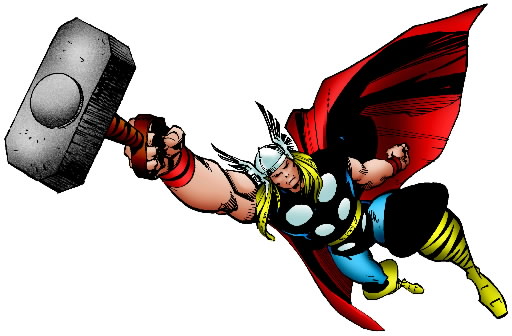 So we’re all gearing up for Iron Man 2 in a couple months but next year Marvel is unleashing the God of Thunder into theaters with the Thor movie.  Chris Hemsworth (most recently seen as Papa Kirk in Star Trek) is set to wield Mjolnir and the movie is also starring Natalie Portman, Anthony Hopkins, Kat Dennings, Ray Stevenson and Idris Elba.  Paramount released a plot summary earlier this week and it seems that Odin casts Thor out of Asgard after Thor’s reckless actions restarts an ancient war.  Thor is cast down to Earth and meets the beautiful scientist Jane Foster and he decides to change his ways and become a true hero, just in time to face off against one of Asgard’s most deadly foes.  As with most of the Marvel movies coming out, Thor is going to link up with the Iron Mans, The Incredible Hulk, Captain America and, ultimately, The Avengers.  Expect Samuel L. Jackson’s Nick Fury to come calling sometime during the movie.