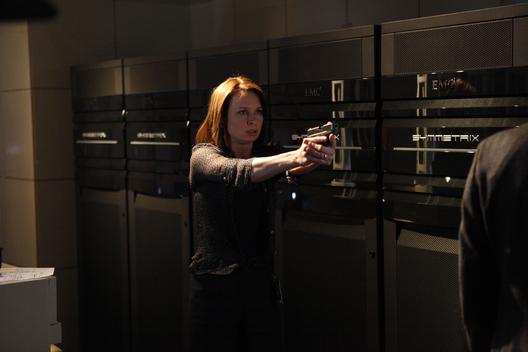 Hastings and co. were scrambling to get CTU back up and running.  Analysts were reduced to to writing with pens and paper and everyone was carrying around mini flashlights.  Thankfully, after a call from Jack, the NSA sent over a team of engineers with a fresh batch of cell phones and a plan to get the servers running.  Chloe overheard their plan and thought she had a better way, instead of manually removing and replacing all the motherboards they could tap directly into the trunk line.  NSA engineer Haymen was a major douche and told Chloe it was too dangerous.  After calling Renee for some support for both her and Jack, Chloe cowboyed up and took over the server room at gunpoint and went about tapping into the trunk line.

Jack and his team were heading toward the East River as, with the NSA shutting down bridges and tunnels, it was the only way for Samir and his men to smuggle the rods into Manhattan.  Unfortunately the CTU team ran into an ambush and Jack crashed the SUV trying to escape.  A firefight broke out with the CTU team pinned down by snipers while Samir and Tarin escaped by zodiac across the river.  Communications were being jammed and Jack figured the only way to get help was to make it across the dock yard to a call box.  Jack Macgyvered up some armor panels and the team made their way across the yard.  Everything was going fine until Agent Red Shirt freaked out and broke formation, taking a bunch of shots as a result.  Owen, Jack and Cole ducked behind some shipping crates and tried to figure out their next move.  Red Shirt continued to take shots until Owen disobeyed Jack and tried to drag him to safety, taking a shot to the neck for his efforts.  Both died soon afterwards and it was up to Jack and Cole to take on the remaining terrorists themselves.  Jack ordered Cole to make a run for the call box while Jack drew fire.  The plan worked but Jack took a couple rounds to the bulletproof vest and was knocked out.  Just before getting sniped, Renee saved the day and took out most of the remaining terrorists in about 10 seconds.  Cole joined the NYPD in a chopper to hunt down Samir and Tarin while Jack got medical attention for a possible collapsed lung.

Back at CTU, security broke into the server room and Chloe’s repairs were halted.  Making a last ditch appeal to Hastings, he agreed to let her finish and she got communications and satellite back on, much to Haymen’s chagrin.  Oh, Kayla Hassan was reunited with her parents and the Presidential family was finally being evacuated underground to meet with President Taylor at a secure location.  Kayla was also going to help CTU try and identify her kidnappers.

Finally, we get to what is becoming THE STUPIDEST SUB PLOT IN 24 HISTORY.  Dana, thinking she caught a break due to the EMP, told probation officer Praty that the video of the robbery was destroyed.  Despite non-essential personnel being evacuated, Praty managed to stay behind and wanted to meet with Hastings.  Dana confronted him again and he told her that he knew she had something to do with the robbery and he was going to take her down.  Dana retorted by strangling him with a cord and then dumping his body in the suspiciously large CTU floor vents.  If this whole thing wasn’t stupid enough, we then find out that Dana is somehow a mole for Samir and is going to help him avoid detection in Manhattan.  I’m longing for some Kim and the cougar action right about now.