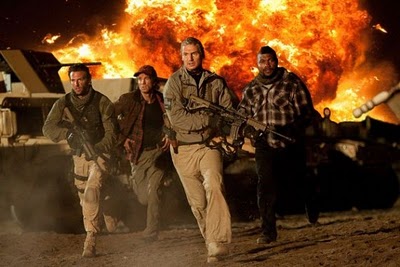 So the day after we get the groin grabbingly awesome Expendables trailer we get a new longer trailer for it’s summer competitor, The A-Team.  Liam Neeson is Hannibal, Rampage Jackson is BA, Bradley Cooper is Face and Sharlto Copley is Murdock, pretty great casting but I gotta go with the internet consensus which is we are way less excited for this after seeing The Expendables trailer.  In the trio of  mercenary team movies coming out this year Expendables is definitely my number one must watch and I think I might want to see The Losers more than the A-Team just because I think it’s looking like it’s got a better sense of humor and it’s not going to be stupidly ridiculous i.e. no tanks blowing up planes in mid air. It looks like they’re going in a little bit of a parody route with The A-Team and it’s not working from what I’ve seen (Why would BA hum the A-Team theme?) I’m definitely still going to see the A-Team but I’m a little worried it might be a train wreck. Which mercenary team movie are you most looking forward to?  Check out the trailer and let us know in the comments.