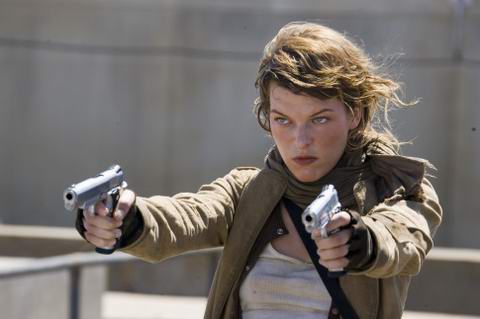 Paul W.S. Anderson’s magnum opus continues with the fourth installment of the Resident Evil movie series.  Genetically engineered killing machine Alice, played by Milla Jovovich, sets out to stop Resident Evil big bad Wesker from unleashing more viruses and taking over the world.  Alice is joined by Chris and Claire Redfield and some new monsters like RE5’s Executioner make an appearance.  The movie was also filmed with James Cameron’s new 3D camera, which they apparently blew the whole budget on because judging from the trailer the movie just looks horrendous.  The first RE movie was kind of fun and that laser scene was awesome but they apparently went down hill fast (I haven’t seen Apocalypse or Extinction).  Afterlife looks like a terrible Matrix rip off that’s gonna just assault you with gimicky 3D effects.  Take a look for yourself and tell us what you think.