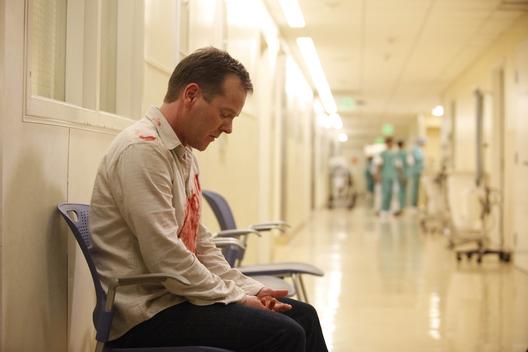 Some new enemies emerged last night and an old one came back.  First things first, Jack reported in to President Taylor, who told him not to blame himself for Hassan’s death.  Samir was the only one to survive Jack’s raid but he was in critical condition.  Cole ordered him brought to CTU but missed a sketchy EMT inject something into Samir’s neck.  The EMT then beat a hasty escape but not before brushing past Renee, who seemed to recognize him.  Jack told Cole that with everything wrapped up, he was going home.  Cole said that Hastings would probably want to debrief them but Jack said Hastings knew where to find him and then he and Renee headed back to Jack’s apartment to do a “debrief” of their own.  I don’t think Jack has gotten laid since the Season 4 prequel so good for him.

Most of the episode was focused on President Taylor.  She was sadly going to announce the end of the peace summit when Jamal, one of Hassan’s top advisors, came to her with another option.  After a ton of convincing, Dalia Hassan agreed to take her husband’s place as president of the IRK.  This didn’t sit well with shifty Russian delegate Novakovich, who it turns out was in on the day’s events with Samir and now this mysterious EMT/assassin.  The assassin, who looked and talked like he overdosed on Valium, told Novakovich that he recognized Renee from when she was undercover with Vladimir.  Novakovich told him to just follow Jack and Renee but Sleepy went across the street to an office building and set up a sniper rifle.  Novakovich told Taylor that Russia didn’t believe the peace agreement could go through without Hassan so they would be pulling out.  President Taylor went to confer with Ethan, who told her that he had been getting some calls from Charles Logan, who said he might have information that could help.  President Taylor agreed to meet with him and Logan revealed that he had information from his friends in Moscow that would pressure the Russian delegation to remain in the peace talks.  After some stern words, President Taylor allowed Logan to do his business.  Logan said he was going to go meet with Novakovich.

The peace summit was set to return to the UN but Homeland Security Tim had some concerns about CTU’s ability to handle security.  Hastings was given the brunt of the blame for allowing Dana into CTU and allowing President Hassan to be killed.  Tim called Chloe and told her that she would be the provisional head of CTU until a replacement could be found.  Hastings gave her a pep talk and headed to Division to make his final debrief.  Almost immediately Chloe’s leadership skills were tested when Samir went into cardiac arrest.  CTU’s medics were unable to save him and Chloe ordered an immediate tox screen, which revealed he was poisoned.

Back at Jack’s, Jack was getting himself and Renee a drink in the kitchen when his cell started to go off.  Renee saw that it was Chloe and got caught up to speed about Samir.  Renee mentioned that she recognized the EMT and told Chloe to gather all of her files from her time undercover.  Unfortunately, answering the phone made Renee vulnerable to Sleepy, who shot her in the chest and then unleashed a barrage of fire to try and hit Jack.  Jack made it through unscathed and grabbed Renee, who was barely hanging on.  Both Jack and Sleepy moved down to the street, with Jack getting into a taxi and Sleepy trying for one more shot but he was too exposed.  Jack rushed Renee to the hospital but it her injuries were too great and she died.  Right before, Chloe called Jack and told him about what Renee had said about the EMT and that they had tried to track the sniper.  Although he says he isn’t in the preview for next week, I think it’s a safe bet that Jack is going to be out for revenge and god help anyone in his way.