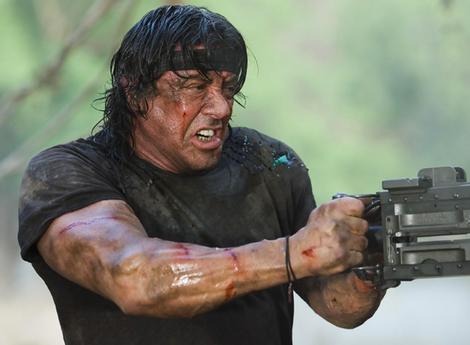 So after two potential ideas were tossed out it seems that Stallone has had a change of heart and is “99% sure” that Rambo V won’t be made.  In a recent interview with Empire, Stallone says that upon further consideration he feels like Rambo IV is a good way to have the character come full circle, similar to Rocky Balboa.  There will be more Rambo in the future as Sly is working on a director’s cut of Rambo with an extra 12 minutes added on.  I think like 8 or 9 more minutes of Rambo on the .50 cal would be awesome but Sly said in the interview that it’s more character based stuff, like a speech he gives to Julie Benz’s character near the beginning of the movie.  One other bit of Stallone news is that apparently Sly is already planning a sequel to The Expendables.  I’m sure Sly could be 70 and in a wheelchair and he’d still be kicking ass so I say keep it coming.