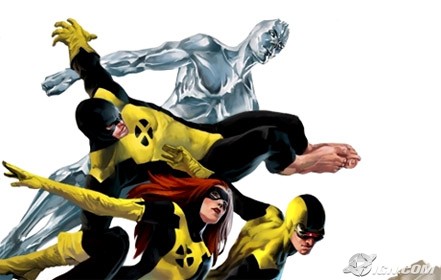 X-Men: First Class is going to need a bigger classroom, as it seems like every day someone else is getting cast in the movie.  Based on the comic series of the same name, it’s a prequel the follows the founding of Professor X’s school and the first group of mutants that he teaches and trains, which includes Cyclops, Beast, Jean Grey, Ice Man and Angel.  The movie is going to change that up a bit and follow more in line with the Bryan Singer X-Men movies. So far the casting is  James McAvoy as young Professor X, Michael Fassbender from Inglourious Basterds is playing Magneto, Alice Eve as Emma Frost, Aaron Johnson possibly will be Cyclops and then recently it was announced that Ben Walker (most known as the boy in About a Boy) will be Beast, Caleb Landry Jones (kid on the bike in No Country For Old Men) will be Banshee and Lucas Till (from Walk the Line and others) will play the little brother of Cyclops, Havoc. Kick Ass director Matthew Vaughn is signed on to direct and Bryan Singer is involved in some capacity.  Wolverine left a bad taste in my mouth (cleaned up by the ridiculously awesome game though) so I’m wary of X-Men movies right now, especially as it seems they are trying to cram as many characters in as they possibly can.  Hopefully they can bring it back to the level of the original two Singer movies.