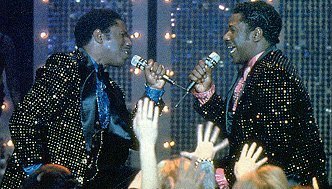 After a week’s break we’re back with the penultimate episode of Sliders season one and it’s a fun one.

In typical Sliders fashion, the cold open is a world the Sliders are just about ready to slide off of.  Quinn is in jail for what seems to be a pretty heinous crime but he refuses to cooperate with his lawyer, confident that he’ll soon slide and none of this will matter.  At his appeal hearing, both of his appeals are rapidly dismissed and he’s sentenced to death for spraying graffiti on a highway overpass.  Fortunately the timer only has  few seconds left so the gang springs Quinn and makes a run for it.

Arriving on the main world for the episode, people start reacting very strangely to Rembrandt and they soon learn it’s because on this world, Rembrandt is bigger than Elvis (he’s “The King”) and there’s a huge convention in town for Rembrandt impersonators. Rembrandt is ecstatic, proclaiming that they’ve finally found paradise. The gang checks into their usual hotel and learn that this world’s Rembrandt died eight years ago when his fishing boat was lost off the gulf in a storm.  The news report also shows amateur video of the group walking across the street from earlier and it’s speculated that Rembrandt is this Earth’s Rembrandt and also that Quinn is Jim Morrison and Arturo is Pavarotti.

Meanwhile, Captain Jack, The King’s agent, is rehearsing with his latest act, a group of elderly women who do country Devo covers that seem to have wandered in from the UHF telethon.  A local reporter comes to visit him about the return of Rembrandt and he immediately rushes off to the hotel to find him.  The hotel, meanwhile, has been surrounded by crazed Rembrandt fans on account of Will Sasso tipping off the press.  Rembrandt is loving every second of the attention and runs out to greet his fans but almost gets torn apart.  Arturo tries to go help him and is crowd surfed against his will and has his pants and shirt ripped off.  In one of his greatest moments he manages to come back in to the hotel and furiously explains how he’s not Pavarotti because he’s English.  Captain Jack manages to fight his way through the crowd and makes an offer to Rembrandt; He has set up a comeback concert special on all the major networks and Rembrandt will get $1 million a song.  Of course Rembrandt accepts this immediately and the group tries to quietly escape the hotel and head back to Captain Jack’s office. Rembrandt is distracted by the sight of his old Cadilliac and runs into it’s owner, who pretends to congratulate him on his return and then knocks him out with a champagne bottle and kidnaps him.  Quinn manages to memorize the license plate before it drives off.

At Captain Jack’s office, the gang wants to call the police but Jack refuses, claiming that if people find out the King is missing he’ll be buried in lawsuits and lose tons of money.  The gang calls the police anyway but are ignored because of all the Rembrandt they usually get.  Quinn manages to hack into the DMV database and gets the address for the owner of the Cadilliac.

The owner is Maurice Fish, former member of the Spinning Tops and certified lunatic.  Rembrandt wakes up in some sort of dungeon with Maurice threatening him with a razor blade and demanding that he sign a paper saying that Maurice was the true star of the Spinning Tops and that Rembrandt stole all of his songs from him.  What makes this all creepier is that Maurice acts like Little Richard.

Quinn and the others are about to go investigate the address when the real King shows up.  This is the first episode to utilize the fact that actor Cleavant Derricks has a twin brother so no crappy 90’s green screen this time.  The King explains that he faked his death so that he could live the rest of his life in peace and quiet.  The King joins the gang and heads over to the address, only to find a gun toting ex of Rembrandt’s.  She explains that she kicked Maurice out and he went to live at his nephew’s house.  The gang gets there just in time to stop Maurice from slicing Rembrandt’s neck.  The King makes an offer to our Rembrandt, telling him that he’ll let him take all the fame if he lets him go back to his quiet life of fishing.  Rembrandt accepts and gets ready for his first huge concert and also telling the gang that he’s not going to slide with them.

Rembrandt takes the stage and the crowd goes crazy, but it goes even crazier when the real King power slides onto the stage and upstage him.  The King had come to see how good Rembrandt was but upon hearing he was getting paid $1 million a song from Wade, he decided it was too good to pass up.  The King declares Rembrandt the greatest impersonator of all time and goes on with the show.  Rembrandt dejectedly rejoins the group and they slide out.

Overall this is one of the funnest Sliders episodes.  They have a lot of fun parodying Elvis and there’s also a bunch of great musical jokes like Captain Jack saying he hasn’t seen a crowd this big since Michael Jackson rejoined Public Enemy.  Next week is the season one finale, which has an interesting concept but an extremely messy ending.