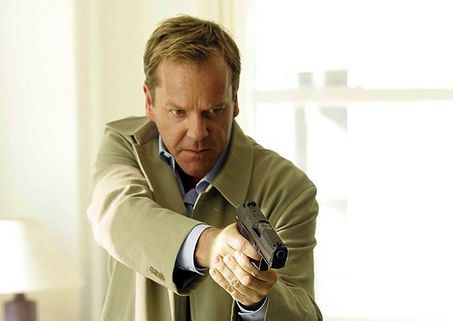 It’s been a year since Jack Bauer saved America for the last time (at least until a movie gets made) and with it’s absence there’s been an open space on television for an action show with a very special set of characteristics like a bad ass main character, ridiculous technology, increasingly ridiculous plot points, constant action and unnecessary character subplots.  I got to thinking if there’s any show that lives up to some, if not all, those characteristics and the result may surprise you.

Before I get to the show I think best fills the void left by 24, let’s talk about some of the shows I looked at but decided, for one reason or another, aren’t quite the 24 successor.  Fox seemingly had an action show all set to go with last year’s debut of Human Target.  Mark Valley was a fun, ass kicking hero and he had support in the form of Chi McBride and Jackie Earle Haley.  During the first season the show featured some great action in a variety of exotic locations like a monastery and a bullet train.  It was much more formulaic and straight forward then 24’s labyrinthine government conspiracies though but in terms of taking up the action baton, it seemed ready to go.  Then season two started and my hopes were shattered when they introduced two of the most annoying characters in television history and lost pretty much all the charm and excitement they built from the first season.  Instead of going to say, the Alaskan wilderness, now the most exciting place the crew went was generic office building or Mexican town.  So, scratch that off the list.

In terms of competing with the bad assness of Jack Bauer, I think currently Raylan Givens of Justified is our current BAMF.  Raylan is much more layed back than Jack however and, lucky for him, the ladies he sees usually don’t end up dead or insane.  Ultimately, I think Justified might be too good to be the next 24, as it features brilliant writing, acting and sane, fantastically paced plots.  As much we love 24 here at Everything Action, there were times when it was almost daring us to keep watching by focusing on terrible characters and subplots, (last year’s stupid Dana subplot, Kim’s adventures in babysitting during season two and all of season six for instance)

One last show I considered was Burn Notice and it definitely features 24’s love of crazy government conspiracies and Michael Westen could probably give Jack a run for his money but I think, due to it’s nature, it’s too formulaic (there’s always an over arching plot but the meat of the show is the “client of the week”) and the Burn Notice gang, for the best, doesn’t have any unnecessary character subplots and they rely less on technology and more on crafty spy knowledge and conning people.

Ultimately, the show that I think best encapsulates most of the things that made 24, 24 is…*drum roll* Hawaii Five-0. 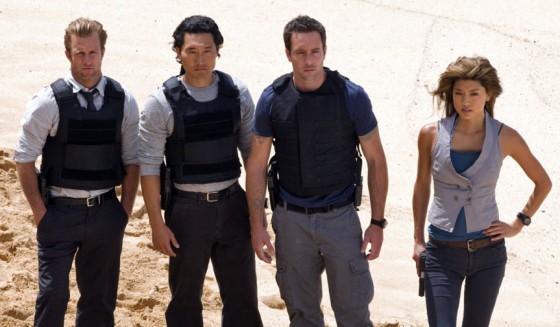 If you’re freaking out, please keep in mind that I’m not saying that 5-0 is better than 24, I’m just saying that 5-0 has the same specific lovable ridiculousness that we loved about 24.  Speaking of ridiculous, 5-0, although a procedural, has both crazy episode plots and an increasingly insane over arching plot.  Past episodes have included the 5-0 team trying to catch a group of bank robbing tri-athletes, an evil Irish terrorist running amok and a surfing company CEO getting killed while catching a wave.  Similar to 24 as well is the increasing character subplots such as McGarrett’s trouble making sister, Danno’s constant attempts to gain more time with his daughter and Chen’s getting kicked off the force for corruption accusations and his recently introduced ex-wife (coincidentally played by 24 alum Reiko Aylesworth) Along with those, there’s the overarching plot of Steve McGarrett trying to figure out why his father was killed and what case he was working on, the evidence of which is stored in an old toolbox.  Recently we’ve learned *spoilers* that the Japanese Yakuza is involved and were probably responsible for blowing up McGarrett’s mother in a car bomb.  There’s also one, if not many corrupt cops on the Honolulu PD, does that sound like a certain Counter Terrorist Unit to anyone else?

Speaking of CTU, the Five-0 task force seems to have the same amount of vague power as they are able to commandeer any investigation and are able to solve cases through any means necessary.  Five-0 also shares CTU’s love of unrealistic, seemingly magical, computer technology.  In Five-0’s massive headquarters, for only four people, they have a massive touch screen computer that the group is able to “toss” images and files off of onto their numerous hanging monitors.   McGarrett also frequently gets help from his sexy Navy friend, who manages to Chloe such things as using Navy satellites to track suspects, isolating a specific radio frequency on the island and find out where it’s broadcasting from and hacking into a phones to get conversations.

Living up to Jack Bauer is a tall order for anyone and, while Steve McGarrett would probably last 2 minutes against Jack, he’s still an OK substitute.  He definitely shares Jack’s taste for over the top questioning methods.  Steve has hung a guy off a roof by his ankles, dropped a guy into a shark cage and tied a guy to the hood of his car.  Steve also shares Jack’s lack of humor and his sense of intensity and urgentness.

Finally, Hawaii Five-0 definitely shares 24’s sense of action, as there’s not an episode that doesn’t involve at least one shootout and/or car chase.  The pilot kicked off the series action sensibilities with a fantastic sequence that involved Steve McGarrett’s Navy convoy getting attacked by an attack helicopter and that episode ending with Steve and Danno storming a ship to stop the evil Irish terrorist who killed Steve’s father.  Time will tell however if there will ever be such memorable sequences as Jack’s attack of Victor Drazen at the end of Season One, Jack’s attack on Logan in Season Eight or the rescue of Secretary of Defense Heller in Season Four.

Hawaii Five-0 is the show that best lives up to 24’s legacy of great TV action combined with wonderfully ridiculous plots, magical technology and characters that are able to do whatever they want with little to no ramifications.  Agree or disagree?  Let me know your thoughts.