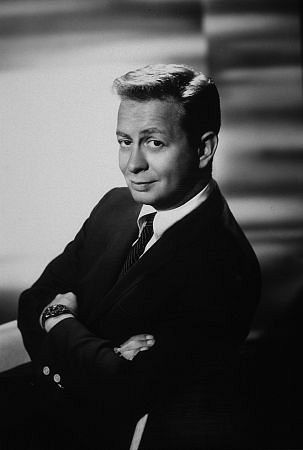 This week is a twisty, fun mafia inspired episode of Sliders that features the one and only late Mel Torme as himself.

Before the Sliders end up in their mafia adventure however, they’re finishing up their time on an Earth where 84% of the population has gone to law school.  This has made everyone extremely nervous about getting sued so movie reviews are neutral and you need a stack of medical forms to order a burger.  The gang slides out just after Rembrandt accidentally bumps into a woman and is informed by a nearby lawyer that he’s probably going to be sued for collision.

The gang slides into the next world right in the middle of a huge mafia wedding joining the rival Jewish Greenfelds and the Italian Gabellos.  Everyone is shocked when they see Rembrandt and are even more surprised when he seemingly knows Mel Torme, who’s singing at the wedding.  The families call postpone the wedding to get rid of their mole problem.

The Sliders, meanwhile, head to the Dominion Hotel in the Las Vegasesque San Fransisco of this world.  Hotel manager Calhoun gives them a suite with assurances he will keep them anonymous but calls in to Washington DC to inform FBI HQ that Deputy Director Brown just checked in.  Quinn goes to try and find a news stand to get some information about this world and is informed by Calhoun that someone wants to talk to him.  It turns out to be Mel, who’s a government agent, and Mel tells Quinn that Rembrandt is getting too cocky and is going to blow their whole investigation into the Greenfeld/Gabello merger.  Mel tells Quinn to the tell the rest of the group to not doing anything until he gives the word.  Quinn heads back to the suite to find that Tommy Greenfeld, brother of the bride, has just left after giving Rembrandt $100,000 for his “appearance” and Quinn realizes they just took a bribe.

The group tries to figure out if there’s a way to give the money back but can’t think of anything so Quinn decides to go find Mel at his gig and get his advice.  At the bar, which only serves soda since Prohibition is still in effect, Quinn gets involved in a fight where a jerk is a hassling a lady.  Quinn kicks his ass and helps the girl, named June, to a cab.  June thanks him for his help but also pickpockets him, taking the $100,000.   Quinn goes back to catch Mel, who’s just ending his country music concert.  Quinn tells Mel the truth and although Mel doesn’t believe him, he agrees to make some calls to Washington.  Quinn agrees to wait for Mel’s word before they do anything and starts heading back to the Dominion when Mel’s car explodes.

The next day, this Earth’s Rembrandt arrives in San Fransisco.  He’s the leader of the Incorruptibles, who are trying to put an end to the mafia’s control of the country.  Rembrandt promises to figure out what’s going on and avenge Mel’s death.

Quinn heads off on his own again to try and find June and get the bribe money back.  While he’s gone, Leah Greenfeld shows up at the Sliders’ suite, asking for protection from her father and offering a list of corrupt officials in return.  They try and tell her they aren’t the FBI but Arturo and Wade agree to bring the disk to the FBI while Rembrandt watches over Leah.  Arturo and Wade find the FBI in a crappy abandoned furniture warehouse and the FBI’s Rembrandt is not interested in anything that they have to say so Arturo and Wade reach out to District Attorney Biachi, who agrees to bring them and Leah into protective custody.

Meanwhile, Quinn finds June at the blackjack table but has lost all but $5000 of the money.  Quinn decides to try and win it back by going on an epic blackjack run.  Quinn eventually catches the eye of the pit boss but has won back all the money so he cashes out.  Heading back to the Dominion, he finds Leah and Rembrandt held at gunpoint.  Arturo and Wade are caught by the Greenfelds.

All four of the Sliders are brought to Ben Greenfeld, who interrogates them about the whereabouts of his daughter.   One of the Sliders is wearing a wire and Incorruptible Rembrandt and the FBI are listening outside.  DA Biachi is revealed to be on the mafia’s take as well and the FBI takes this as a cue to bust in and arrest everyone.  It turns out that our Rembrandt switched with the FBI’s Rembrandt to set up the Greenfelds.  The Sliders quickly head out to slide, as they only have a couple minutes left but Quinn leaves Leah with $5000 to give to June for her help.  Everyone but Quinn slides, as he holds up for a few seconds to talk to a shadowy Mel Torme, who apparently faked his death.  He tells Quinn to stay good and that “the cooler the cat, the harder he is to kill”.

Next week is the season finale of Season 2 and the group arrives on a world where everyone under the age of 30 hold all the power.

Total Recall: Sliders “The Good, The Bad and The Wealthy”