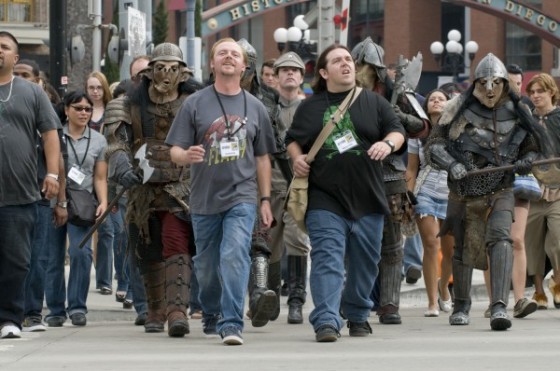 After giving us loving tributes to the zombie and action genres with Shaun of the Dead and Hot Fuzz, Nick Frost and Simon Pegg (sans Edgar Wright) bring us a tribute to being a nerd in general with Paul.

Pegg and Frost star as Graham and Clive, respectively, as a pair of nerds from across the pond who make the pilgrimage to San Diego and the geek holy land that is Comic Con.  After seeing all the sights, including meeting their favorite sci fi author Adam Shadowchild, the guys head out on a road trip to visit some of America’s most famous UFO hot spots.  Visiting “the black mailbox” near Area 51, the guys meet the titular Paul (Seth Rogen), an alien who crash landed on Earth in the 40’s and has been living deep inside the base.  Paul decided to break out of the base when he learned that the government wants to take out his brain to learn about his abilities, which includes going invisible and healing.  Clive and Graham agree to help Paul get to his destination but icy bad ass Agent Zoil (Jason Bateman) is in pursuit as well as the father of a girl the guys inadvertently kidnap (Kristin Wiig).

While it’s not going to reinvent comedy as we know it, Paul is still a consistently funny movie.  Seth Rogen makes Paul a sarcastic smart ass, who has become completely naturalized in his 40+ years on Earth and loves drinking, smoking weed and making tons of crude one liners.  Nick Frost and Simon Pegg are great together as always and are always able to play off on another to build up to jokes or keep them going.  They also clearly love all things Sci Fi so all the references they make and their ever increasingly nerdy T-shirts feels completely natural.  Kristin Wiig, surprisingly, steals the show as Ruth Buggs, who starts out as a crazy religious fanatic who gets “awakened” from a mind meld with Paul and decides to catch up on all the debauchery she’s missed out on, which includes starting to come up with some ridiculous curse word combinations.  Jason Bateman can pretty much do no wrong and he gets to flex his bad ass muscle in Paul, which I thought was great but I did miss his usual shtick that he perfected on Arrested Development as the exasperated semi-straight man.  Bill Hader and Joe Lo Truglio round out the main cast as a pair of incompetent FBI agents that get assigned to help Agent Zoil and they have some great back and forth.

Paul has a number of great running jokes as well, from the aforementioned Kristin Wiig swearing to people having to explain who Adam Shadowchild is by listing off ridiculous titles.  None of the humor is anything you haven’t seen before but the cast is funny enough that pretty much everything lands.  The plot is also pretty much just your typical road trip/chase movie that you can pretty much see everything coming.  One of the major ocmplaints about Paul that I’ve heard from other sources is that they feel at some point the movie stops having jokes and just starts referencing things.  I didn’t really feel like it was as dramatic a switch as that but there definitely is a sequence or two near the end that is reference heavy but it sort of goes along with the celebration of nerdery that is the movie.  It’s the equivalent of Pegg saying “Shit just got real” and other action movie lines in Hot Fuzz, although I will admit that Fuzz and Shaun were both cleverer and funnier than Paul.

One aspect of Paul that I thought was really impressive was Paul himself.  The CG is fantastic and Paul feels like he’s actually there and interacting with the other characters, it’s extremely well done.  He’s also animated extremely well.  The movie also features some great practical effects including a couple of fantastic car crashes and an insane explosion that would have felt out of place in Commando or a Michael Bay movie.

Overall, Paul is a fun comedy that is full of nerdy humor and some great comedic actors doing their thing.  It’s not going to win any awards for originality but if you’re a geek who loves things like ET, Star Wars, Close Encounters of the Third Kind, etc you’ll probably enjoy the melting pot of all of them that is Paul.