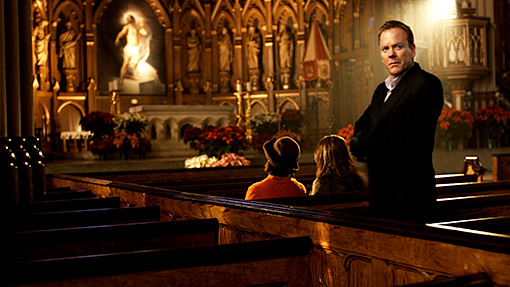 It’s been over a year since we last saw Keifer Sutherland in action on 24 but he’s back to kick ass in a new Hulu web series called “The Confession”.  Keifer plays a hitman who goes to a church to confess to the priest (John Hurt) about his past sins.  At first the priest doesn’t want anything to do with it but is forced to listen to the confessor after he threatens to kill a pair of women in the church if he doesn’t listen to the man.  The men debate the nature of evil and the nature of God as we get flashbacks to things the Confessor has done in the past.  It’s classic Keifer, who’s definitely in Jack Bauer mode but with the added bonus of being able to drop f-bombs at will since this is the internet.  Three episodes debuted today (the 28th) and there will be 10 in total.  You can watch Episode 1 below: