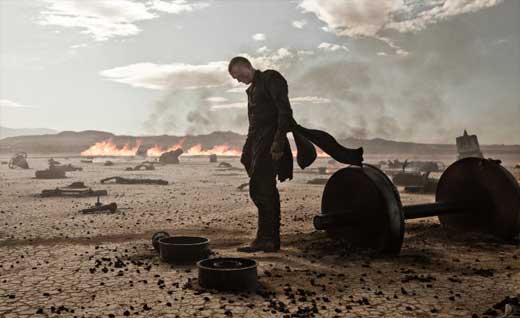 This summer has been off to a great start with back to back blockbusters in Fast Five and Thor.  This weekend’s big release, Priest, feels like it should have been released back in January or February.  It looks good, has some decent action but everything else is pretty mediocre.

Priest follows an unnamed priest (Paul Bettany) who forsakes his vows to go on a mission to rescue his niece from a resurgence of vampires.  During an opening animated sequence (easily one of the highlights of the movie as it’s animated by Samurai Jack/Clone Wars animator Gennedy Tartakovsky), it’s explained that for centuries, mankind and vampires have been waging a war and that the tide was finally turned when the Priests were trained and unleashed.  The vampires were placed onto reservations and the war was thought to be over.  The plot is nothing original and the whole movie feels like a mix of a bunch of other movies like Blade Runner, Equilibrium, Book of Eli and Blade.

Paul Bettany is one of those actors where it’s almost impossible to hate him, even when he’s in horrible movies.  He gives a pretty good “quiet bad ass” performance in Priest and he’s becoming a pretty good action star.  I would love to see what he can do with an action movie with a much better director/script/plot.   Karl Urban plays the unnamed bad guy who is a former Priest but is transformed into the first human vampire by the vampire queen.  It seems like Urban is going to be a hilariously insane bad guy, but he’s not in the movie enough to truly become unhinged and chew scenery.  Rounding out the cast are master thespians Maggie Q and Cam Gigandet, although this is probably the latter’s best performance (which isn’t saying much when your major credits are “asshole in Twilight” and “asshole in Never Back Down”).

If you’ve seen the trailers for Priest, you probably expect Bettany to be constantly killing vampires with a wide assortment of religious themed weapons.  In reality, there’s only 2, 2 1/2 action sequences in the whole movie, which is kind of unacceptable for a big Summer blockbuster.  Most of the movie is Paul Bettany brooding and he and Cam Gigandet following the vampire trail and arguing about whether Bettany will kill his niece if she’s infected (FYI, he definitely will).  When the action does kick in, it’ s good, but nothing spectacular, relying mostly on flashy slow motion and the Priests’ Jedi like powers.  Another thing that hinders the action, especially with a movie about vampires, is that it’s PG-13.  I think the movie could have been much more fun if they had gone crazy with the gore, a la Blade, but instead the action is kind of neutered.  Even if they had made the vampires bleed a different color so they could have gotten away with more would have made a difference.

One of the main selling points of Priest is it’s 3D and I will admit that it is one of the better looking 3D movies I’ve seen.  Everything has a nice sense of depth and it seems like they took their time with the conversion, unlike say Clash of the Titans or Last Airbender.  I also like the look of the futuristic city where the movie starts out.  Since the church has become the source of power there are propaganda posters, crosses and confessionals everywhere.  There’s also a constant rain of ash and it’s extremely dark and gloomy.  I also think the vampire design is pretty interesting with them pretty much being weird cave animals with no eyes.

Overall, I would say Priest is a pass in theaters unless you’re a superfan of 3D (matinee only though) but might be worth a watch on DVD or it’s inevitable debut on Netflix Instant Watch.  It’s definitely not up to the standards that have been established for this Summer’s blockbuster season. Hopefully Paul Bettany can find a better action project in the future because he’s fun to watch and definitely has some action chops.

Action Hero of the Week: Priest