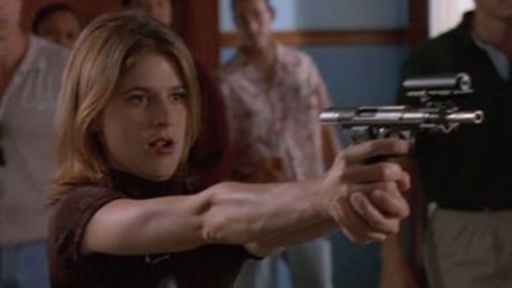 This week Quinn is accused of a crime his double is wanted for and is forced to be a contestant on this Earth’s bizarre game show based form of justice.

The gang slides into Hollywood (apparently after a couple of boring slides to Buttonwillow, Wasco and other dirtball towns in California) and Wade is excited to do some sightseeing.  After taking a photo with Dolly Parton’s spot on the Walk of Fame and buying a map to the star’s homes, the gang sees someone’s wallet lying on the sidewalk.  Quinn wants to see if they can find some ID in it but Arturo recommends they leave it, judging from the security cameras in the area and people’s reactions.  The gang is also being watched by a mysterious woman who attempts to shoot Quinn with a tranquilizer gun.  Quinn ducks down to pick up the wallet and the dart misses him and hits a bystander.  Seeing the crowd’s reaction get worse, Quinn ditches the wallet and the gang heads to the Royal Chancellor Hotel.

While the gang is relaxing in the hotel bar, the mysterious woman and her muscle bound goon tranquilize and handcuff Quinn and taze Rembrandt.  The others learn that the woman has authority to take whoever she wants and that Quinn is being taken to the studios of “The Judgement Game” where he’s set to be a contestant.  Wade, Rembrandt and Arturo get the address of the studios from the bartender and take a taxi to the location.  When they arrive and try to enter, the guard at the door tells them that the audience is already seated.  However, if one of them is Quinn’s advocate then they can come in.  Arturo is chosen and he is reunited with Quinn on the set of the show, where it’s revealed that Quinn is being charged with murder.  The Judgement Game, on this Earth, has replaced the traditional judicial system of Earth Prime.  Criminals become contestants on the show (or one of it’s competitors) and the studio audience votes on the contestant’s fate.  The show is hosted by the energetic Skip Collins (played by special guest star Don Most).

While Arturo and Quinn are trying to figure out The Judgement Game, Wade and Arturo manage to break into the studio through a side window and eventually hear what sounds like an editing room.  Wade sneaks into the building’s air vents and sees a group of technicians working on the key piece of evidence, a video that shows this Earth’s Quinn savagely beating a man and then stealing his briefcase.  Wade manages to find the woman who arrested Quinn, who turns out to be a bounty hunter/contestant coordinator named Terry.  Terry refuses to listen to Wade’s explanation that Quinn is from a parallel Earth but the studio audience seems to be eating it up as Quinn and Arturo realize that the audience cares more about entertainment than the truth.  However, when it comes time to vote, the audience turns in a guilty verdict.  Quinn is then forced to choose a door, a la Let’s Make a Deal, but he refuses and that brings out “the wheel” where door number two comes up after the wheel is spun and it’s revealed that Quinn will be executed the following night by guillotine.  Quinn accosts Terry before he’s dragged out, yelling that he’s innocent and Terry, after hearing both Wade and Arturo and Quinn talk about parallel Earths and how Quinn might not be this Earth’s Quinn seems to start having doubts about which Quinn they have.

The others go to visit Quinn at the prison he’s transfered to but it doesn’t go well, with Quinn angrily destroying a security camera and telling the others that they have to find his double or else they’ll slide 17 minutes after Quinn is executed.  Wade remembers a name and a bar that Terry mentioned when she captured Quinn and Wade goes undercover to try and get a location on the other Quinn.  The gang then stakes out the location one of the waitresses gave Wade and eventually the other Quinn rolls in.  When Arturo tries to question him, he gives a douchey smile and then runs off.  The gang corners him near a fence and Terry arrives to tranquilize him after confirming that the Quinn is jail isn’t this Earth’s Quinn when he doesn’t have the other Quinn’s distinctive knife scar on his back.

The gang brings the other Quinn to their hotel room and question him and he claims that he was at a race track during the time the murder happened.  (It’s worth noting that Jerry O’Connell puts on a horrible Jersey/Italian accent as the other Quinn)  Wade puts together the video she saw in the air ducts and figures that they must have faked the video of Quinn by putting his face on someone else’s body.  She and Terry confirm this by breaking into the studio’s computer system and seeing that it was actually executive behind The Judgement Game, Phil, who was in the video.  The Judgement Game was losing ratings to competitors so Phil started rigging the game to get better ratings.  Wade manages to taze him and she and Terry escape out the air ducts.  The gang comes up with a plan to break Quinn out before the execution, with some help from the other Quinn’s welding expertise.  They commandeer a press van and pose as representatives of the European affiliates of the show.  Quinn and Wade then hide in a secret compartment in the floor of the van while Rembrandt ties up Terry and himself to make it look like Quinn escaped.  Unfortunately, Phil arrives and sees through the ruse so Arturo punches the gas and tries to make a break for it in the van.  In more bad luck, the prison is built on a cliff and the gang runs out of road after crashing through the gate.  With a little under a mintue left to slide, Quinn has the gang follow him on a leap of faith and jumps off the cliff and activates the portal in mid air.  After the gang slides, Terry reveals to the press that The Judgement Game is rigged and presents the doctored tape as evidence.

Dead Man Sliding is a fun episode of Sliders but I can’t help but think that if this was a season one or two episode that they would have explored more of how The Judgement Game came to be and fleshed out the world more.  We get little tidbits from characters here and there but mainly you just have to accept it at face value.  Don Most is pretty great as the host of the game and kind of has a Richard Dawson in The Running Man thing going.  Next week we get another special guest as Freddy Krueger himself, Richard Englund, guest stars in the episode “State of the A.R.T.”