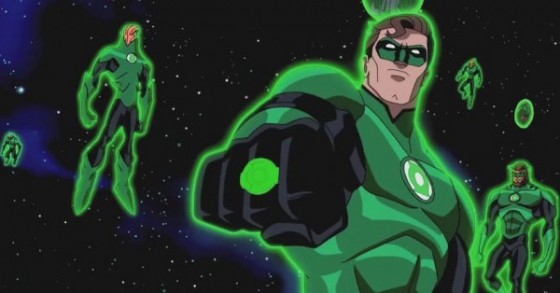 The latest DC Animated movie is out with Green Lantern: Emerald Knights, just in time for the release of the Green Lantern movie next week.

Emerald Knights finds Hal Jordan and the Green Lantern Corps. dealing with their latest crisis.  An ancient evil being named Krona seems to be on the verge from escaping from the antimatter universe he was banished to.  The entire Corps. is called in to help evacuate their base on Oa and then set up around the sun Krona is seemingly coming out of and stop him if he does.  During all this, Hal tells rookie Lantern Arisia some stories about some of the legendary Green Lanterns.

The movie is broken up into five different stories ranging from the story of the first four Lanterns to a story about Moggo, a Lantern who is literally a living planet.  The stories range from fun, like the Moggo story as a crazy warrior named Bolphunga attempts to draw him out, to serious like the story of Laira, who is sent back to her homeworld after becoming a Lantern and must stop her family after they have perpetrated a series of unprovoked attacks on neighboring planets.  I really enjoyed the Killawog story, which follows him as he and some other new recruits are put through the brutal Lantern boot camp.  It’s cool to learn about some of the other characters outside of the ones everyone knows, like Hal and Sinestro, but it does make those two especially seem like they’re on the sidelines.

The internet almost exploded when they learned that their choice for Hal Jordan, Nathan Fillion, would be voicing Hal in Emerald Knights.  He’s great in the role but he doesn’t really have a lot to do other than narrate these stories about other Green Lanterns.  If you were hoping to see Hal kicking ass, you might be disappointed because Hal is practically on the sidelines until the end of the movie.  Jason Issacs is a great choice for Sinestro and another nice choice is Henry Rollins as Killawog.

There’s a ton of action in Emerald Knights but I was kind of disappointed that there seemed to be some laziness in regards to the Green Lanterns “constructs” or when they create something using their rings.  For the most part, the rings are basically just used as lasers and there’s only a couple of really creative constructs that are used.  Another disappointing thing is that the animation for the main story is great but when they go into one of the stories, sometimes the animation doesn’t look as good. I’m not sure if maybe they had different people animate the different stories or what but there’s just something that isn’t as crisp about some of the animation.

If you want to learn some more about Green Lantern before the movie comes out, Emerald Knights is a fine way to do it.  I think First Flight is still the best of the DC Animated movies and I would put Emerald Knights near the middle of the ones that have been released.  I would say it’s worth a rent.