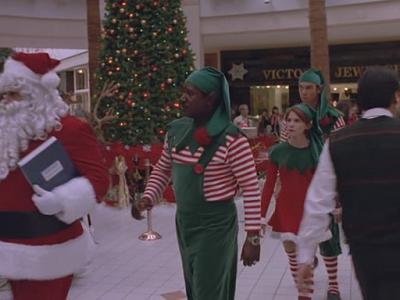 Sorry about the unexpected two weeks off from Sliders recaps but we’re back this week to celebrate Christmas and for the Sliders, that means taking down a corrupt mall president.

The gang arrives on the main Earth for the episode after barely escaping from a world populated by jungle tribes that Wade inadvertently sent into a rampage by smiling at one of the men, which in their culture meant she wanted to have his children.  The gang lands outside a church and Quinn notices a nativity scene and guesses that it must be almost Christmas.  Wade wants to go into the church and give thanks for their escape and the guys agree.  While Wade goes to light a candle, Arturo is asked by an attractive young mother to hold her son for a minute while she goes to light a candle as well.  Arturo gladly accepts but the gang loses track of the mother and they rush out of the church to find that she hopped onto a shuttle bus and abandoned her baby.  The gang determines to head to the Sky High Plaza, the destination for the shuttle, and they leave the baby with the pastor of the church.

The gang arrives at the escalator to Sky High Plaza, a mall that is literally in the sky on a set of tiers.  On this Earth, malls are more than just shopping centers but house schools, housing and hospitals.  People work and live in the malls and basically become indentured servants and slaves.  The gang tries to buy some food but learn that the mall only accepts “Plaza Cards”.  Fortunately for them, two of the executives are passing by at that moment and Rembrandt is able to get them jobs.  Wade is distressed to see that the executives are doubles of her sister Kelly and her father Don, but they don’t seem to recognize her.  The gang is hired to be a part of the mall’s Christmas display, with Arturo, of course, playing Santa and the rest of the gang as elves.  Arturo tries to impart the true meaning of Christmas onto the kids of the mall, who are extremely greedy and rude, and while doing so spots the baby’s mother, who he learns is named Carol.  Carol explains that she left her baby so he wouldn’t become a slave like she is to the mall.  She has to wear a special wrist device that the gang noticed another man wearing earlier that seemed to shock him as he was trying to escape the mall.   Quinn, who gets a new position by flirting with Kelly, manages to get a list of Carols who have to to wear the devices and Arturo sets out to visit each one.  Quinn also learns the wrist devices are put on people who don’t pay their debts immediately when they are due and it’s basically impossible to ever pay it off since the mall takes half of what the workers make for housing and then another percentage of earnings have to be spent in the mall.

Wade, meanwhile, runs into her “father” in the food court and he invites her to have dinner with him at his house.  It’s a little creepy since he doesn’t know she’s kind of his daughter but nothing happens and they have a nice time together.  Don explains that his wife and second child died during childbirth and that he and Kelly moved to the mall a short while later but he regrets it now because Kelly has become a cold, calculating businesswoman.  Also meanwhile, Rembrandt becomes obsessed with shopping, buying dozens of gifts each for Quinn, Wade and Arturo.  Quinn realizes that the constant commercials that play on the TV and in the mall have some sort of subliminal messaging in them.

Arturo manages to find Carol and convinces her they can help her get her bracelet off and get her baby, Alexander, back.  Quinn does more digging into the mall’s files and learns that Carol, and many others, took out massive loans from a firm called Crestview Financial.  The gang learns that Ted Bernsen, the evil, greedy mall president, is behind Crestview as part of his scam to increase the malls profits.  The gang and Carol decide to get evidence on Bernsen and while Carol lets Quinn and Wade into Bernsen’s office, Arturo and Rembrandt get Bernsen out of his office by teaching a group of kids about the evils of consumerism and the true meaning of Christmas.

Wade and Quinn attempt to hack into Bernsen’s computer but they trip a security program that gives them only 60 seconds before security personnel is alerted.  Kelly arrives at that moment and threatens to call security herself but Wade manages to convince her that she is the sister she never had from a different Earth by recounting past events from Kelly’s life.  Kelly deactivates to security on the computer and she and Quinn and Wade get all the evidence they need on Bernsen and they deactivate all the wrist devices and clear all the debts.  Bernsen tries to escape when confronted with the evidence but Quinn easily catches him and punches him out.

With everything resolved the Sliders, along with Carol and baby Alex, have Christmas dinner at the Welles’ house and then have to slide out.

As far as Christmas episode go, Season’s Greedings is actually pretty good.  It dips into the cheese quite a bit but it’s got a bunch of fun stuff going on and some crazy character stuff as well, like Arturo revealing that his mother and two aunts were killed in a bombing during WWII and that he had to spend four months in an orphanage until his father returned from fighting in India.

Next week the gang heads to an Earth where stressed out workers can take part in elaborate role playing games and Arturo gets to play Sherlock Holmes, on the trail of Jack the Ripper.