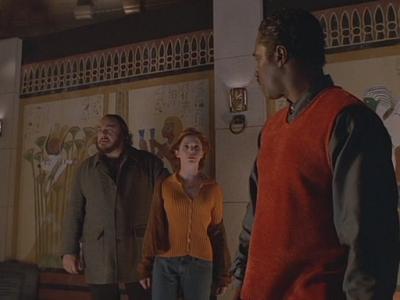 This week the Sliders tackle a classic staple of alternate reality/dimension fiction as they journey to a world where Egypt remained the dominant force in the world and Los Angeles is now pyramid covered New Alexandria.

The episode begins with the gang excitedly wandering down the main drag of New Alexandria and Arturo theorizing that Alexander the Great must have been defeated in the ancient past, which allowed Egypt to maintain and extend it’s reign until the present day.  The gang also sees that the pharaoh has recently died and will be sealed in his pyramid the next day.  Unfortunately the gang’s fun exploration, as it so often does, is interrupted when Wade loses track of the guys and wanders down an alley, right when a group of workers are carrying a huge box toward the pyramid.  Whatever is in the box breaks a claw through the box and grabs the woman who seems to be supervising.  Wade goes to help but gets trapped by the thing as well.  The guys arrive to help but are held back by security men, ordered by a very pharaoh looking official.  Quinn manages to break through the security and uses a nearby metal pole to pry the claw away from Wade and the girl and forces the claw back into the box.  The pharaoh looking official, who is named Kheri-Heb and is in charge until a new pharaoh chosen, orders Wade and the girl, named Sheilah, to be sent with the other slaves to the pyramid since they touched the “sacred scarab” and Quinn is ordered to be brought to the hospital for some sort of experiment.

In the van on the way to the pyramid, Sheilah tells Wade that the thing in the box is a genetically engineered scarab that is to be a guardian of the pyramid and the slaves will be it’s food source.  When they arrive at the pyramid, Sheilah is brought inside but Arturo manages to rescue Wade.  They have very little time before the slide so they are forced to leave Sheilah to head back to the Chancellor to wait for Rembrandt, who went to rescue Quinn.

Quinn, though, is beyond rescuing because he’s being used in an experiment the scientists of New Alexandria have been conducting where they kill patients and then attempt to bring them back to life and record their death experience.  When Rembrandt arrives at the hospital, all of Quinn’s blood has been drained and he’s flatlined.  Quinn sees all of this through an out of body experience and Rembrandt angrily forces his way out of the hospital.  Quinn then goes to heaven/the afterlife and plays a quick game of catch with his dad, who tells him it isn’t his time yet, and then Quinn is revived at the hospital by Dr. Deera Mubaric (special guest Apollonia).  She is anxious to hear about his death experience but Quinn refuses to say anything unless she takes him to the Chancellor hotel, which she agrees to do.

Quinn and Deera arrive at the hotel to find that the rest of the Sliders are not there.  Earlier, heartbroken over the news that Quinn was dead but wanting to do something to honor him, the trio of Arturo, Wade and Rembrandt snuck into the temple to free Sheilah, who told them about the Necrology department at the hospital and their death experiments.  With the chance that Quinn could be alive, the trio has only 90 seconds to decide if they will slide without Quinn or be stuck on this Earth and look for Quinn.  Arturo opens the portal but none of them jump in.  Unfortunately, before they can go find out about Quinn, the pyramid is sealed to prevent the scarab from escaping, it having gone on a rampage, possibly because of the portal opening.  Quinn sees a news bulletin about the pyramid being sealed and an intergalactic portal being opened inside by three individuals.

Quinn and Deera head to the office of the architect to see if there’s another way inside while Arturo, Wade and Rembrandt actually run into the architect in the pyramid.  He tells them there’s a way out that they have to go the computer room to unlock but before he can show them where it is, he’s eaten by the scarab.  The trio dodges the scarab and makes it to the computer room.  Both groups figure out around the same time that the pyramid is able to rotate and that if it’s aligned in a certain spot, an underground tunnel will be revealed.  Quinn also finds another timer in the office of the architect and Deera reveals that the royalty of this Earth are able to slide.  Quinn and Deera dodge the New Alexandria PD and head for the pyramid while Rembrandt dodges the scarab looking for the secret tunnel, but isn’t able to find it.  Wade notices that the pyramid seems to keep stopping in the same spot during each rotation and so she freezes it in that spot, luckily right when Quinn and Deera arrive in the tunnel under the pyramid.  Arturo, Wade and Rembrandt make their way through the pyramid and follow Quinn’s voice to the boarded over secret tunnel.  Rembrandt breaks through and the gang escapes just before the scarab arrives.  With the NAPD coming up the tunnel and the scarab behind them, the Sliders decide to use the new slider to slide out, even though there’s still 13 hours on it’s countdown.  This means they’ll still be randomly sliding but they accept it and slide it.  Deera, meanwhile, goes to stall the police and send Kheri-Heb down the tunnel, where he’s grabbed and eaten by the scarab.

There’s some great emotional moments in this episode from the trio of Wade, Arturo and Rembrandt reacting to Quinn’s “death” to their, monumental at the time, decision to not slide.  Some of the other stuff is not so strong, like the absolutely terrible CG scarab and some of the Egyptian sets and costumes, which range from ok to extremely cheap looking.  Overall it’s a pretty fun episode.  Next week, the gang slides to a world that is populated by giant worms straight out of Tremors.