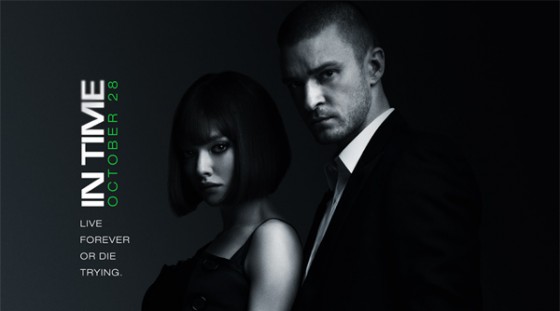 Another Comic Con trailer is out, this one for Andrew Niccol’s “In Time”.  Niccol has previously directed Lord of War and Gattaca and wrote The Truman Show and The Terminal.  His latest is a sci fi action thriller that stars Justin Timberlake as a man who lives in a world where people only age until the age of 25.  At 25, you have to work for more time, which is the main currency instead of money.  Timberlake’s character runs into a guy in a bar (White Collar’s Matt Bomer) who has somehow gotten hundreds of years of life and transfers them to Timberlake.  With his new wealth, Timberlake moves up into the rich section of the city but quickly becomes a target of corrupt cops.  The movie has a pretty interesting concept but hopefully the movie explains it a little more clearly than the trailer does.  The movie co-stars Cillian Murphy, Amanda Seyfried, Alex Pettyfer, Olivia Wilde and Johnny Galecki and is out in October.