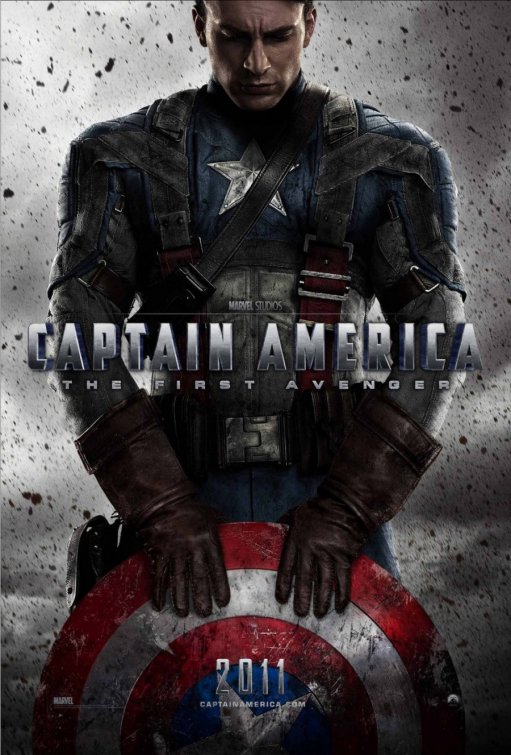 This summer has been jam packed with superhero movies, 2 absolutely fantastic Marvel movies in Thor and X-Men: First Class and one completely mediocre DC movie in Green Lantern.  The bar was set incredibly high but Captain America performs a super soldier serum powered jump over the bar and crushes it with it’s shield as it is easily one of the best movies of the summer and the best superhero movie of the year.

Captain America tells the origin story of Steve Rogers, a 90 pound weakling who desperately wants to join the fight in Europe during World War II.  He catches the eye of German ex-patriot Dr. Abraham Erskine, who offers him the chance to join a secret project that transforms him into Captain America.  He’s quickly thrown into action to combat the world dominating threat of Hydra and Johann Schmidt aka The Red Skull.

Marvel continues their knack for great casting as Chris Evans is great as Steve Rogers.  It’s nice after suffering through Green Lantern and Ryan Reynolds’ unrelenting assholeness to have a hero that is actually heroic and a good person.  Evans does a great job of conveying 90 pound Steve’s desperation to serve his country and when he finally gets to start to kick Hydra ass, you’re fully behind him.  Speaking of 90 pound Steve, we saw it in the trailer but the special effects for making Chris Evans a shrimp are absolutely incredible.  It’s pretty seamless and you actually start to forget that they digitally mapped Evans’ face onto a CG (?) body.  Hugo Weaving, one of the greatest villain actors ever, delivers another great villain role as Red Skull and the makeup/CG to transform his head was top notch.  An unexpected but welcome source of comic relief was Tommy Lee Jones as Colonel Chester Phillips, who’s constantly taking the piss out of Steve.  The rest of the cast isn’t as well known but are all pretty great in their roles from Hayley Atwell as a surprisingly bad ass Peggy Carter, Sebastian Stan as Steve Rogers’ best friend Bucky Barnes and Dominic Cooper as Howard Stark, who shows us where Tony got his cocky showmanship and technological know how from.

Being a protege of Steven Spielberg and directing The Rocketeer, Joe Johnston is no stranger to the action/adventure genre and he goes whole hog with Captain America, combining elements from Indiana Jones, James Bond and WW2 movies into one of the most fun and exciting movies of the year.  There is tons of great, old school Indiana Jones style action sequences and Bond like scenes of Red Skull plotting his world domination with the help of a certain Asgardian artifact.  One of the aspects of Captain America that Johnston perfectly nailed was his fighting style with the shield.  Every time Cap threw it, it looked and felt great.  One of my only nitpicks of Captain America would be that I would have liked to have spent more time with Cap and the Howling Commandos.   There is a montage of them blowing up Hydra bases but I would have liked to have gotten to know the members a little better and there’s definitely some other parts you could have cut down to get more screen time with the Commandos (the propaganda/musical number sequence comes to mind).  There was also a slight problem of abruptness in the movie, whether scenes ended a little too soon or events just sort of happened, I’m thinking specifically of the “death” of Bucky, which, if you’re a Cap fan you were expecting, but it sort of came out of nowhere and didn’t really have much impact.

Captain America also does a great job of combining the aesthetics of World War II and the 40’s with the crazy technology of Hydra.  I love that every vehicle has some sort of rocket engine and there are some wonderfully inventive airplanes and tanks in the movie.  The look of the Hydra troops is also really cool and Cap’s costume looks amazing as well, probably the second best looking suit in the Marvel movieverse behind Iron Man.

If you’ve been enjoying the Marvel movies so far, Captain America is easily a must watch as it’s probably only beaten by the original Iron Man.  It’s amazing that Cap has had two absolutely atrocious attempts at breaking onto the big screen when this movie seems effortless in the amount of great action, humor and special effects it brings.  Even if you think you’ve had enough superheroes for the summer, Captain America will not disappoint and it’s definitely one of my favorite movies of the summer, if not the year.  The Avengers (which is teased so awesomely in the post credits trailer *Homer drooling noise*) cannot get here soon enough.